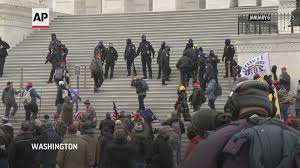 We don’t hear much from the commission investigating the events of Jan. 6, when the most violent acts at the American Capitol occurred since the British burned it down in 1814.

Yet this tragic event could have claimed more victims, and new revelations suggest that former President Donald Trump really did intend to manipulate the process so that he could remain in office in spite of the election results.

The ability of this commission to shed light on these events is therefore vital if the United States is to get out of the mess that seems to be leading it toward the quiet end of its democratic experiment.

This secretive commission is starting to move forward, though key witnesses chose to ignore their subpoenas to appear and to supply documents.

Those close to Trump energetically resist, but their legal arguments don’t hold. Evidently, the ex-president’s henchmen will continue to use the same methods that helped Trump evade a long list of criminal accusations by dragging out proceedings, putting up smokescreens and, more than anything, outrageously politicizing investigations.

The Trumpist strategy for erasing the reality of Jan. 6 from memory is working. The majority of Republicans believe that this insurrection is not worth their attention, and they have completely swallowed Trump’s Big Lie that claims he was the winner of the 2020 election. (About that, there are just as many reasons to believe this as there are to believe that bleach injections are therapeutic.)

Moreover, Trump continues to set the scene so that if either he or his appointed puppet loses in 2024, his followers will not believe it and the Republicans will feel justified in tampering with the vote count so that it is in his favor.

This insistence on making millions of people swallow lies is Trump’s basic strategy for infiltrating the Republican Party. This is why no elected Republican dares to contradict it.

This strategy extends to the interpretation of the Jan. 6 insurrection, which is determined to transform its protagonists into martyrs. Since the lie is shared by all the elected Republicans and the media feels obligated to claim that these elected officials should be taken seriously, the lies and the counter-truths have become acceptable elements of political discourse.

This is why Trump’s entourage fears this commission and why Trump himself will do all he can to avoid testifying, because while under oath they could never repeat the lies that they serve up daily to their followers.

We are not quite there yet; Trump and his acolytes are going to stretch out the proceedings while they make themselves look like victims of relentless Democrats. It’s enough to just let the clock keep ticking until the expected reversal of Congress in November 2022 and to count on Republicans to bury the failed insurrection of Jan. 6, while waiting for the success of the next episode.