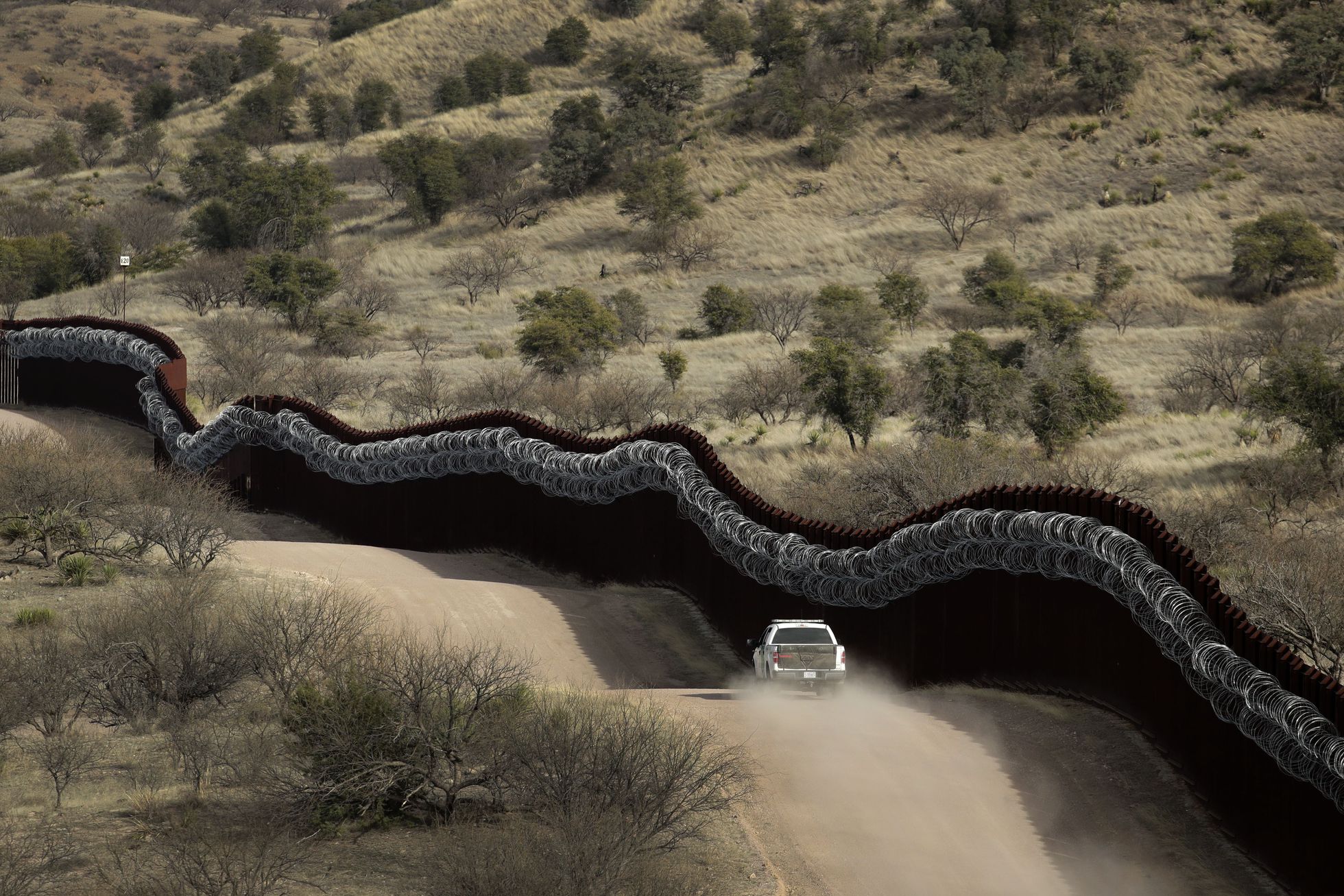 Data from the U.S. Customs and Border Patrol agency show that in the last 12 months, 56,881 Brazilians were detained after crossing the Mexican border on foot.

When he left Minas Gerais at the beginning of this year, 23-year-old Leo had a plan: try for a better life in the United States, like many of his countrymen. But last Friday, Oct. 22, he returned on a flight to Brazil, during which he was handcuffed at his feet, hands and waist for most of the time. This followed seven months of an American nightmare, detained in prison for the whole period. “We were put in a high security prison and returned to our country handcuffed. I, who was always healthy, returned taking five antidepressants and had alopecia; half of my hair fell out. It was seven months of agony and terror,” he told a reporter as soon as he left the terminal at the Belo Horizonte International Airport in Confins. He flew in a chartered plane with other Brazilians who were deported after crossing the border between Mexico and the United States.

Flights such as these have become frequent in the city since October 2019, a measure that President Donald Trump implemented. They arrive once a week. Last August, under the Democratic administration of Joe Biden, the U.S. sought to add a flight; Washington expects it will be able to send three planes with Brazilian deportees each week. This is a response to the exponential increase in the number of Brazilians deported after crossing the Mexican border. Data obtained by El Pais show that in the past 12 months, the number of detained Brazilians in this situation is already more than double the number registered over the past three years combined.

The figures come from the U.S. Customs and Border Protection agency, which is responsible for patrolling the borders and apprehending immigrants in the country illegally. In the last U.S. fiscal year, from October 2020 to September 2021, 56,881 Brazilians were detained after crossing the Mexican border on foot. In the 2020 fiscal year, there were 7,161 Brazilians, a figure apparently impacted by the pandemic. A year earlier in 2019, 17,893 Brazilians were detained, a significant jump in relation to 2018, when 1,504 detainees were recorded. These include people diverse in age and origin, who seek to cross the extensive border by sea, through the desert or by surrendering to U.S. immigration authorities to apply for asylum.

The Brazilian exodus in search of work opportunities in the past three years joins the movement of other poor people from Latin America, which has brought the United States one of the largest migratory crises in history. There is a record increase in the number or people who tried to enter the country from the Mexican border, the largest increase in the past 20 years, according to Secretary of Homeland Security Alejandro Mayorkas. The crisis has forced Biden to follow the same policy of his predecessor, whom he criticized during the presidential campaign for inhumane treatment of immigrants. The dramatic images of Haitian immigrants being lassoed last month by border patrol agents on horseback circulated around the world.

The Brazilian situation also worries the Mexican authorities. This month, the government of President Andrés Manuel López Obrador announced there it would soon reinstitute a visa requirement for Brazilian tourists who seek to enter the country. Since 2004, the two nations have had an agreement by which a passport was enough to guarantee access. There is no date at the moment for enforcing the restriction as the the project is being reviewed. According to the available text, the measure will be temporary and will seek to stop the entrance of any traveler “whose profile does not correspond to that of a visitor or genuine tourist.” Moreover, the legislation notes that some Brazilians “present inconsistencies in their documentation … which reinforces the possibility that a significant number of people intend to use the visa waiver improperly.”

The story of Leo, who spent seven months imprisoned in the U.S., is not unprecedented in his native city of Governador Valadares, known as Valadolares, because of the huge number of residents who live in the United States and send remittances in American currency to family members. Leo took the same route that thousands have followed, the Mexicali. He took a taxi to the Arizona border and paid $300 to a coyote (a person responsible for conducting the illegal crossing) to help him get to United States. “I was deceived. They said I would spend three days at the border and would be in,” he recounted. He ended up getting caught. “They didn’t let me try to get asylum, I was not interviewed. They just said I was denied. If the process is fast, if they know they will deport me, [they should] deport quickly. They didn’t need to keep me seven months. Now that I am in Brazil, I want my barbeque, to see my family, and I won’t go back there very soon.”

Migration levels set a record in the United States during the first months of the Biden presidency. The scene repeats itself with the dozens of planes which have already landed in Belo Horizonte bringing Brazilian deportees. The deported passengers disembark stunned, with their few belongings held in potato sacks. Often they are far from home and don’t know how to return to their cities. All the planes arrive in the Minera capital, but carry people from a diverse number of states. Pedro, 21, crossed the border with this wife and year-old son. After his application to complete the U.S. asylum questionnaire was approved, he was rejected. “I left here looking for a better future for myself, my wife and my son. My life was difficult, we were both unemployed. Since we turned ourselves in at the border, I have not had contact with them, was in prison for three months, and just spoke with them last Thursday, one week before I left. In the three months that I was imprisoned, I lost 10 kilos (approximately 22 pounds). It was very humiliating,” he said. “But I will return. My family is there, and will try the same thing again. I will try until I die or until I enter.”

The frustration of being separated from the family also is a common issue among deportees. Caio tried to enter the U.S. with his wife, just as Pedro did, and wound up failing the asylum interview after his partner passed. “I left [Brazil] for the reason everyone leaves, to have a better life, to realize my dreams,” he said. He followed the basic rules, step by step, required for those who want to cross the border. “I went through Mexico. First I was imprisoned there with my wife. I was hungry, and my wife was harassed in prison. They sent us back to Mexico City, then we returned to Mexicali. We turned ourselves in to United States Immigration.” During the asylum interview, Caio was asked if he had ever suffered “torture or some kind of religious or political persecution, those things.” “I didn’t pass [the interview] and was put in prison. I was there five months and they sent me away.”

Airport staff are already used to receiving the deportees who arrive hungry, desolate and needing to reestablish contact with freedom. Many disembark in tears, like Jessica, who spent almost an hour crying into the telephone. “I didn’t commit any crime to have my hands, feet and waist chained beyond trying to enter their country. It was desperate. I’ve had the wish to enter the United States since being a child and the crisis just increased that desire,” she said. Jessica was studying animal science, but abandoned her studies to follow her dream. She took a plane to Mexico. “At the airport, the taxis themselves know where to take you. I turned myself in [to the U.S.], had an interview, was denied, paid a lawyer and appealed, but the judge did not accept my appeal. I spent 55 days there, in prison.”

The routine behind bars marked the young woman. “We were imprisoned the entire day. The food served in there is food one wouldn’t give to a pig. The water is from the cell sink, where people wash their face and hands and brush their teeth. I shared that with just one other person, and as the cell was closed, I had to do necessities in front of another person.” During the period of detention, she had one last hope. “At the time of returning, I thought I had been approved, because sometimes a person is denied and out of nowhere is approved, there isn’t a rule. But sadly, it was to return,” she lamented. “Now I will wait for my father to send me money so I can go home. I live in Rondonia. If I didn’t have him, I don’t know what I would do because they send you to a random city and then you’re on your own.”

The increase in the number of Brazilians who try to enter the U.S. illegally through the Mexican frontier has resulted in the death of at least one person. In September American authorities found the body of a nursing technician, Lenilda Oliveria dos Santos, 49, in a desert near Deming, New Mexico. She had crossed the border with three friends only days before, guided by a Mexican coyote. During the crossing she couldn’t continue walking, and was abandoned. She was found lifeless one week after sending messages to her family in Vale de Paraiso, Rondonia. She left behind two daughters.