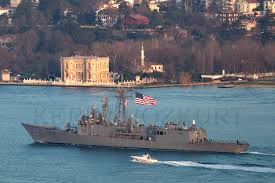 Political scientist Vladimir Yevseev on why the U.S. military is at the Russian border right now.

In anticipation of another summit between U.S. President Joe Biden and Russian Presidents Vladimir Putin rumored to take place in early 2022, the Americans have decided to exert pressure on Moscow in the Black Sea. Accordingly, the USS Porter, a U.S. Navy destroyer armed with guided missile weapons, has been in the area since Oct. 30. The U.S. Navy oil tanker John Lenthall sailed into the Black Sea on Nov. 3, and the USS Mount Whitney, the command ship of the 6th Fleet, sailed into the area on Nov. 4. Moreover, on Nov. 6, to improve the use of strategic bomber aircraft, two B-1B Lancers belonging to the U.S. Air Force conducted flights over the Black Sea, only 100 kilometers (approximately 62 miles) away from the Russian border.

On Nov. 9, a U.S. Air Force E-8C ground target surveillance and strike control airplane was again detected flying over the Black Sea. It took off from the Ramstein Air Base in Germany and was in the Black Sea’s northwestern, central and northeastern airspace for over five hours. Again, Russian military radar equipment belonging to the anti-aircraft missile divisions tracked the American aircraft. The minimum distance from the Russian border was 35 kilometers (approximately 22 miles).

In this event, the Russian Ministry of Defense was obviously forced to declare that such actions are destabilizing the Black Sea region. One of the aims of such destabilization is the military development of Ukrainian territory. Likewise, it was emphasized that the U.S. is trying to use these unprecedented actions to create a multinational military cluster of Bulgarian, Georgian, Romanian, Turkish and Ukrainian armies near the Russian border.

Russia has considered these actions by the U.S. to be attempts at evaluating the alleged theater of military operations should Kyiv be preparing for a military assault on the Donbas. Under such conditions, the Russian military conducts continuous surveillance and monitors the situation to prevent possible provocations. At the same time, it was noted that in June, Russia was forced to fire warning shots at the HMS Defender — a British destroyer that violated the Russian border in the Black Sea, near Crimea. And in October, Admiral Tributs, a large anti-submarine ship of the Russian Pacific fleet, prevented the U.S. Navy destroyer USS Chafee from crossing the Russian border in the Sea of Japan.

According to the Montreux Convention, U.S. Navy ships cannot remain in the Black Sea longer than 21 days. Moreover, the total tonnage of military vessels of non-Black Sea states in the area cannot exceed 30,000 tons. For example, the total weight of the USS Porter is slightly under 9,000 tons.

NATO announced its intention to strengthen its military presence in the Black Sea region, something Russia was prepared for. That is why it deployed an army division in Crimea, and the Russian Black Sea fleet has recently received modern warships. These include six diesel-electric submarines, several frigates and small missile ships equipped with Kalibr long-range cruise missiles. In addition, four divisions of S-400 missile systems and several divisions of Pantsir anti-aircraft missile and cannon systems ensure the air defense of Crimea.

It is obvious that even this combination of ground troops and the Black Sea fleet deployed in Crimea is quite enough for the reliable defense of the region against the U.S. and its allied forces. Nevertheless, the Biden administration is deliberately exacerbating the situation for the following reasons. First, Joe Biden is under severe pressure from the Republican Party and Congress — neither is interested in fundamentally improving relations with Moscow.

Second, the U.S. has to support its NATO allies — the U.K. and Turkey — which are increasing the arms supply to Ukraine. Therefore, soon Kyiv will receive two used British minesweepers: HMS Ramsey and HMS Blyth. The Ukrainian military has also received 12 Turkish Bayraktar TB2 unmanned combat aerial vehicles and plans to increase number to 36. At the same time, it has been difficult to agree on a program to construct four missile boats for the Ukrainian army (with four more to be built in Ukraine). This is because the proposed project, based on the Protector 50 patrol ship, can only reach speeds of up to 54 kilometers per hour (approximately 36 miles per hour) and would be compatible with the Kongsberg Naval Strike anti-ship missiles developed by Norway, rather than their Ukrainian equivalents — the Neptune missiles.

Third, Americans are concerned about the reported deployment of Russian troops near the Ukrainian border, which cannot be confirmed because the previous Trump administration withdrew from the Open Skies Treaty, forcing Moscow to do the same.

Nevertheless, even under such conditions, continuing the Russian-American dialogue at the highest level is extremely necessary. It makes it possible for Moscow, to strengthen contacts between the power structures of the two countries. Meanwhile, Washington hopes that such a dialogue will not permit excessive reinforcement of Russian-Chinese relations in the military-political sphere.

According to the media, during the next summit, the leaders will discuss implementing the agreements concluded in Geneva. But the escalation of tensions along the Russian border is not conducive to dialogue.

The author is the head of the Department of Eurasian Integration and Development of the S.C.O. of the Institute of the Countries of the Commonwealth of Independent States.*

*Translator’s note: The Institute of the Countries of the Commonwealth of Independent States is a Russian nongovernmental organization and an analytical center. Its primary purpose is to promote Russian interests in the former

Soviet Union by analyzing the region’s main issues and challenges.