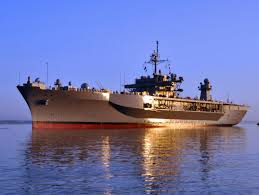 For the past few days, Russia’s Ministry of Defense has been carefully monitoring NATO’s military activity in the Black Sea. According to the Russian military establishment’s assessment, “military exploitation of Ukrainian territory” is occurring in this way and others. Do U.S. military ships by our shores present a real military threat? And what’s the real significance of their deployment to the Black Sea?

American ships have once again come to the Black Sea — the command ship USS Mount Whitney, the Arleigh Burke-class destroyer USS Porter and the tanker USNS John Lenthall. The ships are conducting maneuvers with U.S. allies (de facto vassals). Lay people immediately began speculating whether Russia would be able to destroy these ships, discussing “NATO’s force” in the Black Sea, and so on. Although this speculation is naive, the questions that arise nevertheless need to be answered.

However, of the three American ships currently present in the Black Sea, only the destroyer is strike-capable. Acting as a ship with guided missile weaponry, it can carry approximately 30 cruise missiles in its launching systems. If more, then not many more. The remaining modules are occupied primarily by anti-aircraft missiles. It’s possible there aren’t any cruise missiles on the ship at all, since its mission is defense of the command ship.

From what? The Americans are also weighing risks. Purely theoretically, as the U.S. military might assume, the Russians, embittered by provocations, might raise the 43rd Naval Attack Aviation Regiment stationed in Crimea or strike with missiles from coastal bases — and later they’ll deny having done it.

Or the Ukrainians, eager to incite war between the U.S. and Russia, might strike from airplanes with red stars painted on them. Or the extremely anti-Russian Romania will do the same thing with the same goal, in order to gobble up Moldavia and Transnistria in the ensuing flames. The possibilities are many. From a political point of view they’re all either generally impossible or unlikely, but the military is required to consider all risks, and they do consider them.

Does this destroyer present a real risk to Russia? No. How would the actual actions of the U.S. Navy appear, if — again, purely theoretically — the Americans would decide to strike Russia? The Americans could withdraw their forces from the region in order to avoid a retaliatory strike. Tomahawk cruise missiles can reach the Russian coast from the Mediterranean Sea; there are other means of destroying targets in the depths of our territory. In other words, at the moment there’s no strike force in the Black Sea at all.

Can Russia destroy the American ship? Yes. With what? Anything, but under the condition of mass deployment. With the correct organization, a strike with considerable aviation forces (that same 43rd regiment) or coastal cruise missiles would neutralize the American ship’s counter air defenses. Would Russia strike openly and start a war out of the blue? Of course not. Without a massive strike-provocation, it’s possible to get out and say it was someone else, but it’s not a fact the counter air defenses would be neutralized. More than likely, they wouldn’t.

In short, everything the press is writing regarding the subject of hypothetical military action is speculation in its purest form. There won’t be anything of the sort. The risks for the attacking side are too high, whoever that may be.

So why did the Americans send this detachment to the Black Sea? To give their ally-vassals a political signal: “America’s with you.” Flights of bombers and reconnaissance planes are also aimed precisely at this message. But that’s a secondary task. And the primary?

The Russian Federation’s Ministry of Defense has circulated a statement that the Americans are studying a potential theater of military operations with their presence in the Black Sea, in case Kyiv should decide to start a large-scale offensive in Donbass. This, certainly, is true, and complicity in a possible Ukrainian provocation precisely explains the presence of the American naval task force. However, it’s worth elaborating on one point.

Military personnel think like military personnel. But provocations can be primarily political. We’ll go over one of the scenarios, the most extreme — and thus, of course, unlikely — but worthy of mention all the same.

As we know, CIA Director William Burns and Undersecretary of State for Political Affairs Victoria Nuland recently visited Moscow. The Western press said Burns spoke about Ukraine, among other things. If we’re to presume the U.S. might consider it necessary to inflict foreign-policy damage against Russia, then it’s capable of provoking Kyiv to attack in Donbass. The Western press will helpfully make it appear as if nothing’s happening, and Russia’s reaction will be presented as unprovoked aggression. Later they’ll broadcast on every corner that the Russians they visited in Moscow conspired about something, and immediately after, attacked Ukraine again.

The command ship could be quite useful for the coordination of precisely such a provocation. It could be even more useful if somewhere there were space for the limited deployment of American special operations forces, drones or reconnaissance aircraft.

This, of course, is quite an extreme possibility, but there are others. Particularly relevant are those possibilities provided by the ship’s equipment: The Americans claim the USS Mount Whitney has the most advanced radio-communications equipment of all the ships that have ever existed in the world.

The ship, as stated, cannot only ensure the function of any radio network, but can also conceal the very fact of the operation of its means of communication. Moreover, computer equipment is on the ship. Its possible access to radio channels could give the Americans the opportunity to break into others’ combat control networks — particularly, Russia’s.

This is what Americans call cyberwarfare. The possibilities that such means of warfare provide are enormous. Tellingly, the previous command of the 10th fleet (“Cyber Command,” the headquarters of one of the U.S. Navy’s fleets, to which are subordinated not ships, but units of U.S. Navy military hackers and those units that allow for their military employment) was previously led by the current chief of naval operations (a senior officer in the U.S. Navy), Admiral Michael Gilday. So the dispatch of a ship with hacking capabilities to Russian shores when the U.S. Navy is led by the previous “fleet hacker-in-chief” looks quite logical.

In this case, the danger presented by the command ship is considerable. Software is now used everywhere; it’s possible to break into drone connection channels, headquarters connections arrays and much more while receiving an enormous volume of intelligence information, inflicting serious damage to the command of forces and doing this secretly.

These actions from the American ship are possible, among other things, in the interests of Ukraine in case of one or another provocation in Donbass. Also possible are “bookmarks” for harmful software — or, as Americans previously called them, “logic bombs” — in various weapons guidance systems so that at the necessary moment it would be possible to paralyze Russian defenses.

Thus the presence of a command ship in the Black Sea offers Americans much. For Russia this creates risks both political and purely military — but new, associated with effects on military networks and sophisticated weaponry. The American cyberthreat is real at any moment, and as long as Mount Whitney is so close to our antennas, all the more so.