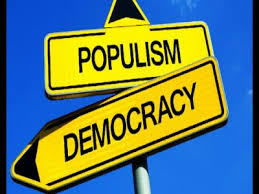 A year ago, the world witnessed a scene that symbolized the decline of democracy. It was a shocking event that saw a huge mob attack the U.S. Capitol and turn it into a scene of bloodshed.

The president, who took office after the attack, appealed for unity in the United States and vowed to protect democracy both domestically and internationally. But unfortunately, the world has been in a state of deepening chaos ever since.

Electoral Reform as a Means of Exclusion

China and Russia are not the only countries that may challenge the existing global order with force. Power politics prevail in many places, including countries where a popularly elected leader is a tyrant, and countries where the military tramples on election results.

How did the freedom and democracy that were liberated after the end of the Cold War 30 years ago descend into crisis? What is the way to rebuild? First, developed countries must look at where they stand right now to find the answer.

This year, South Korea, France, Japan, the United States and other countries will hold national elections. It will be a year to consider the establishment of a governance philosophy and international cooperation suitable for an era that forms a new order through dialogue.

Since the end of World War II, the United States has consistently claimed to be a model of democracy and taken on the mission of spreading democracy throughout the world. The attack on the U.S. Capitol building, however, showed the reality of the fact the United States is no longer able to fulfill that role.

The attack reportedly occurred after Donald Trump’s closest advisers plotted to block the certification of the presidential election results. The division that followed has only deepened since then.

A survey shows that 70% of Republican voters still believe the presidential election was rigged. There has been no end to the number of revisions to the election system that have prevented Black and poor people from voting or arbitrarily changed the boundaries of election districts.

Rather than running on policies that look to a wide range of people, redistricting corrals existing supporters and exacerbates conflict. If elections descend into a dispute over exclusionary politics, national reconciliation will remain far off and political distrust will grow.

One worrisome development after another is taking place around the world.

In Brazil, where the presidential election is scheduled for October, the incumbent who is reportedly faring badly, has accused the election system of irregularities and is prepared to reject the results. In Hungary, a member of the European Union, the electoral system has already been revised in favor of the ruling party, and exclusionary right-wing forces have grown stronger.

The Dangers of Stirring Up Hostility

The factors that have damaged confidence in democracy are complex and intertwined. In advanced democracies, disparities have widened since the end of the Cold War due to economic globalization and technological innovation. Democracy no longer holds a promise of prosperity for those who have been left behind by growth.

People have directed anger at the elite in the United States and Europe, and at those of different races and religions. Division based on identity (a sense of belonging), including division over different levels of education and wealth concentrated in cities as opposed to declining regions, have cut through society. Social networks and the COVID-19 disaster have only narrowed the space for interaction.

Some politicians are trying to increase their own support by stirring up hostility. “The rise of different identities is perceived as a threat, and the effects of emotions such as fear and hatred are enormous,” said Francis Fukuyama, a U.S. political scientist.

A University of Chicago research team analyzing the motive and background of the attack on the U.S. Capitol believes that white people fear they will be replaced by immigrants and minorities. In the run-up to the French presidential election this April, a far-right candidate who plans to run for president is claiming that “Islam is about to replace us” and is gaining support.

The situation in Japan is probably not far from this trend given that people meet Japanese claims to respect the human rights of foreign nations and oppose racial discrimination with rejection and slander. The foundation of democracy is equality and inclusion, and politics that use certain segments of society as outlets for dissatisfaction is not sustainable.

The first thing that leaders of countries need to train their wisdom on are socioeconomic and welfare policies that will correct the distortion caused by economic disparity and unequal opportunity.

There must be comprehensive measures that support the middle class, which is the driving force behind social stability and development, and steps to raise the incomes of the poor and minority groups. The Biden administration’s programs, such as tax credits for families with children and expanded job training, are a first step.

In addition to holding fair elections, legislators must refrain from language and action that antagonize opposing political parties and their supporters, and engage instead in policy-oriented debate.

There are many issues that no country can deal with alone, such as immigration, refugee rights and the confrontation between the United States and China. As former German Chancellor Angela Merkel said before she retired last year, international cooperation is a principle that we must not forget to follow in the modern world.

The proponents of this movement are not just politicians. The activities of citizens working across national borders stand at the forefront of global issues.

Nongovernmental organizations continue to provide humanitarian aid in Afghanistan after the withdrawal of American troops. Young people are calling for measures to combat the climate crisis; activists on social networks aim at abolishing nuclear weapons. And there are others.

In this era of increasing competition and tension between countries, we must expand the space for generating diverse international public opinion through solidarity and collaboration among citizens. I believe that citizens will play a leading role in revitalizing democracy around the world.