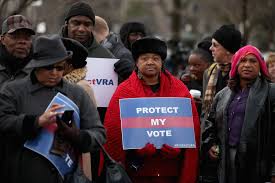 The Republican style is more subtle: They’re looking to avoid fraud during elections — or perhaps to keep people without rights, like migrants, from influencing the country’s destiny.

It sometimes appears that Republicans are looking to create their own system of apartheid, although instead of prohibiting the political participation of ethnic minorities or economically disadvantaged groups, they look for ways to discourage and hinder it as much as possible.

The result would be similar to that which dominated South Africa for decades, where the white minority imposed their regime over a considerable Black and Asian majority.

The Republican style is more subtle, as far as we know. Their pretext is avoiding fraud during elections — or perhaps to stop people without rights, including undocumented migrants, from participating and influencing the country’s destiny.

According to their complaints, not only has it happened frequently, but it also cost them the 2020 presidential election.

But they haven’t been able to provide proof, not even in the states they govern and in which, by law, they control the electoral apparatus — from the electoral roll to the final count.

In fact, in the past year there have been legal initiatives that have made in more difficult to vote in 19 states (although in 25 states, it has been made easier), all under Republican governance and in those that former President Donald Trump and his followers claim had committed fraud — even when they won. And, of course, in those where the Democrats won by just a a few thousand votes.

For example, in Texas, Gov. Greg Abbott and the Republican-dominated legislature passed legislation that could expand early voting in small, Republican counties (municipalities), but restricts measures to facilitate voting in Democratic areas, such as the highly populated Harris County, where advance voting hours during the night and drive-through voting proved popular last year among voters of color.

The new law also restricts the right to vote by mail in a state where this option is already significantly limited. The state’s government is so worried that, according to the Houston Chronicle, they appointed two new lawyers at the state Attorney General’s Office and increased the budget from $1.9 million to $2.2 million.

But last year, this office closed only three cases: An audit by the Texas secretary of state into the 2020 general election found 17 voting discrepancies in Collin County, 10 in Dallas and none in Tarrant. In Texas, more than 11 million votes were cast and Trump won by 600,000.

Does that necessitate legal reform? Or was it simply a matter of pandering to voters who disguise their racism with legal concern?

Viewed from the outside, the answer appears to be more about the sector losing the control it has enjoyed for decades — or centuries — than out of real concern for the legality and purity of elections.