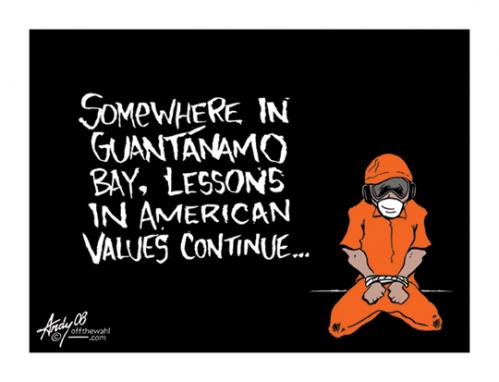 On an annual basis, a single prisoner costs an American taxpayer $12 million, while the Guantanamo prison facility itself costs $540 million. For the United States’ reputation as a state of laws and supporter of human rights, the detention facility is a clear and scandalous disaster. This was not only reported by international human rights organizations, but also recognized in a memorandum signed in April by 24 senior congressional Democrats. Since the naval base was turned into an extraterritorial American prison by former U.S. President George W. Bush, three American presidents — Barack Obama, Joe Biden and Bush himself — promised to close Guantanamo. Former President Donald Trump was the only one who kept his promise to keep the prison open to an uncertain future date.

It is not surprising that, after 20 years of its intervention in Afghanistan, the United States completely withdrew from the country and handed over power to the Taliban. But America itself remains unable to close the infamous prison, after 20 years, presidential promises and Pentagon pledges. Congress — at least, the representatives of the Democratic Party — is now urging Biden to close the prison. “For nearly two decades, the offshore prison has damaged America’s reputation, fueled anti-Muslim bigotry, and weakened the United States’ ability to counter terrorism and fight for human rights and the rule of law around the world. In addition to the $540 million in wasted taxpayer dollars each year to maintain and operate the facility, the prison also comes at the price of justice for the victims of 9/11 and their families, who are still waiting for trials to begin,” wrote the senators.

It is no less surprising that the prison, which has been overwhelmed with a total of 780 detainees of 35 nationalities since its opening on Jan. 11, 2002, hosts only 39 today. Moreover, 13 of these prisoners are awaiting deportation after their release was ordered, while the fate and the court dates of 10 others are unknown. Other numbers indicate that nine detainees died in prison from illness or as a result of brutal torture or suicide. Simple logic, therefore, leads to this equally simple question: What is the point of keeping the detention facility, with its high costs and the small number of inmates in its cells? And what really hinders the transformation of promises and pledges into the actual implementation of decisions that are, at a minimum, in line with that simple logic?

Some of the answers to such questions, and others, come from the fact that simple logic is one thing, and the logic of American administrations, whether simple or complex, is quite another. To understand one part of this equation, consider what Biden said in his capacity as a Democratic senator in 2005: “But the end result is, I think we should end up shutting it down, moving those prisoners […] Those that we have reason to keep, keep. And those we don’t, let go.” Today, 17 years after that simple reasoning, and after he became president of the United States and not just a member of Congress, what prevents Biden from turning opinion into policy?

The violation of the human and legal rights of individuals detained in Guantanamo is completely legitimate from one perspective: The defendant does not share American values, and American values are absolutely and morally correct from the American perspective.

For starters, to justify the establishment of the military prison — within a package of other measures that are outside international law and the American law itself, including flying prisons and entrusting tyrannical regimes with the conduct of some investigations — in the context of what his administration called “the war on terror,” Bush used a key sentence in his message delivered in March 2002: “Remember … the ones at Guantanamo Bay are killers. They don’t share the same values we share.”

It was, then, a question of moral, intellectual, political or cultural values, and not at all a question of applicable laws, an independent judiciary and fair courts regulating criminal matters and punishment. Thus, any violation of the human and legal rights of individuals detained at Guantanamo is quite legitimate from one point of view, which is that the defendant does not share American values, and these values are — only in the American viewpoint! — absolutely and morally correct, with a solid legal premise, as well as various forms of political, military, economic, technological and cultural power.

Other reasons include that most of the detainees were arrested in Afghanistan, and some of them were transferred to the detention center as part of the illegal kidnapping technique practiced by the CIA throughout the world.

All of them were and are subjected to various forms of physical and psychological torture (not least denying them family encounters, communicating messages, etc.). They were also insulted, humiliated, deliberately oppressed, chained and forced to wear dark glasses. According to his diary, published by Amnesty International, Bahraini detainee Juma al-Dosari was given up to American intelligence by Pakistani forces for a few dollars. He says that he was interrogated 600 times, placed in a single cell without being charged and received death threats. He was also subjected to a series of psychological pressures during the interrogation sessions, was forced to listen to loud music, locked for long hours in a very cold room without water or food, humiliated by a female soldier wearing nothing but underwear and then forced to view pornographic material.

Are these American “values”? No, of course not, if one wants to do justice to official American law or the moral and philosophical definition of the concept of “values.” But these values rapidly expanded to embrace ideologies such as the war on terror, the invasion of Afghanistan and Iraq and a good part of the philosophy of the clash of civilizations. Is there a difference, except in the techniques and tools used, between torture practiced by an intelligence officer in the Palestine Branch prison, by the Assad regime in Syria or by American soldier Lynndie England in Abu Ghraib prison during the invasion of Iraq, and the act of forcing a detainee to watch porn in Guantanamo?

The 20th anniversary of the prison camp opening, and its remaining open despite everything pointing to the need to close it, should lead to an obvious question after any valid logical reasoning that is able to explain American behavior: Is this a single disgrace that should shame the American democracy for one specific time? Or is Guantanamo, as was the case with Abu Ghraib and other human rights violations, just an example of an ancient integrated political rights culture that underlies American justice overseas, or even in Cuba, a stone’s throw from America? Another question is: If terrorism is what sheds American blood — the implicated or the innocent, the military or the civilian — then how do the likes of Guantanamo and Abu Ghraib fuel that terrorism and bloodshed year after year?

There are many observations that confirm the existence of an integrated American culture that stands behind these lawless practices, which is an inherent right-wing culture. This culture is taking deeper and deeper root in the daily American conscience. It is also a political and constitutional culture because its advocates occupy high positions in Congress as well as in the Supreme Court, in the courts as well as in the offices of the FBI. This culture is only one of many factors that keep the Guantanamo prison open and seek to diversify it — or create another one!