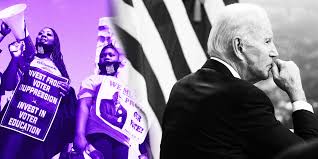 Biden intends to put an end to the qualified majority rule in the Senate that is preventing him from getting his election reform bill off the ground.

Joe Biden celebrated his election in November 2020 with a promise to “heal the United States.” To unite America again after Donald Trump’s presidency left the world’s first democracy immersed in a state of troubling polarization. But the latest political offensive by the current White House occupant, however well-intentioned, could end up widening the fracture even more. Biden intends to put an end to the qualified majority rule in the Senate that is currently preventing him from getting his electionl reform off the ground, and has started a war against Republican states he accuses of violating civil rights by passing restrictive voting regulations. Biden wants to pass federal legislation to prevent states from imposing obstacles on the right to vote, but this could also increase the very polarization he wants to fight.

American democracy is founded on the principle of checks and balances to prevent the concentration of power, as well as on a well-defined distribution of authority between state and federal government. Legislative authority in election matters belongs to the states. Biden wants to change the filibuster rules in the Senate that allow the Senate to veto a bill without a three-fifths majority. But we must reconcile equality and governance with respect to the Constitution’s design.