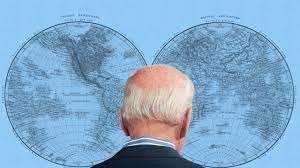 U.S. President Joe Biden will reach the milestone of one year in office tomorrow.

There is still some distance to go in achieving his goals of returning to international cooperation in place of former President Donald Trump’s “America First” policy, and achieving domestic social harmony.

The issues are stacking up. Deeply entrenched conflicts with China and Russia. No progress on reinstating a nuclear agreement with Iran. Repeated missile launches from North Korea.

The number of new COVID-19 cases in the United States has risen to many hundreds of thousands per day. With the cost of living also at a record high, dissatisfaction among citizens is growing.

There are crises both at home and abroad. The administration will be judged for its actions in the November midterm elections.

Biden must strengthen his leadership in both foreign and domestic affairs to show how the U.S. can cooperate with others and heal divisions.

Biden has expressed the view that, internationally, there is “a battle between the utility of democracies … and autocracies,” and described China as America’s “only competitor.”

The U.S. held the Summit for Democracy last year as the self-appointed leader of democracy. China and Russia, among others, were not invited.

Splitting the world into areas that are either pro-America or pro-China and Russia and forcing each country to choose a side will only restrict international cooperation to friends and allies, thereby deepening divisions.

In the withdrawal of its military from Afghanistan, the U.S. allowed the Islamic fundamentalist Taliban to return and endangered the lives of local people. It is a decision that has been challenged both at home and abroad.

There is a mountain of problems, such as COVID-19 and climate change, that can only be solved by cooperative efforts by the international community. Biden should be focusing on deepening dialogue with all countries, including Russia and China, in order to establish a more stable international order.

In his inaugural address, Biden swore to devote his “whole soul” to national unity. As the situation currently stands, he is far from achieving this goal.

Biden’s signature policy, a large-scale investment bill that has been hailed by the left, has run aground due to opposition from one centrist senator within the Democratic Party. Serious divisions within the party comprise yet another issue for the president.

When Biden tried to pass a bill that would counter state laws effectively restricting the voting rights of people of color, he was again unsuccessful in uniting his party.

Trump is becoming more active in preparation for the 2024 election. It is imperative that Biden demonstrate his capacity to rebuild democracy after the assaults it has sustained, just as he did a year ago after the attack on the Capitol.