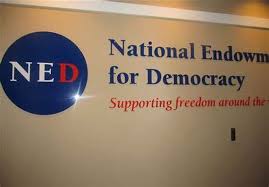 Washington prohibits the media from broadcasting U.S. government-funded propaganda intended for foreign consumption within the United States. Alhurra, Voice of America, and other propaganda tools are only suitable for reforming the backward people who are dominated by the empire of our time. The same applies to the National Endowment for Democracy. Its brand of national democracy is not fit for domestic consumption, only for distribution in countries that Washington deems rogue. The American government, media, voters and candidates may need more insight on how to run elections safely and democratically than we do to avoid a recurrence of last year’s Capitol riot. But until the United States recognizes the flaws in its own democracy, it will not stop interfering with the democracy of countries when it disagrees with the choices those populations make. NED is one of the tools the U.S. uses to conduct this intervention.

The history of official U.S. investment through nongovernmental organizations in developing nations and adversary countries dates back to the 1970s. Robert McNamara, president of the World Bank (1968-1981) and defense secretary at the time of America’s defeat in Vietnam, was one of the first to publicly discuss the concept in a speech in Nairobi, Kenya on Sept. 24, 1973 at the meeting of the Board of Governors of the World Bank Group. On that day, McNamara defined the neoliberal policy that would give NGOs state status, especially in any interventionist role concerning the economic cycle. He believed, “Experience shows that there is a greater chance of success if institutions provide for popular participation, local leadership and decentralization of authority.”

Ronald Reagan entered the White House after his election in 1982 with an agenda prepared for him by neoconservatives, in particular, the “godfather of neoconservatism,” Irving Kristol, and great neoliberal theorists such as Milton Friedman. Reagan approved the establishment of the National Endowment for Democracy in 1983 after the passage of its founding law in Congress, which enabled Washington to finance nongovernmental organizations concerned with “democracy” and “human rights” in East European countries led by Moscow.

“A lot of what we do today was done covertly 25 years ago by the CIA,” said Allen Weinstein, one of NED’s founders and the liaison between Boris Yeltsin and the George H.W. Bush administration between 1988 and 1991. Weinstein’s blunt and frank admission appeared in an article by David Ignatius, a journalist close to the CIA in September 1991, that disclosed a great deal of information about U.S. secret operations to overthrow regimes around the world.

The Bill Clinton administration invested in NED to pounce on the regimes of Eastern European countries after the collapse of the Soviet Union. And the budgets allocated to the fund — and other arms — increased during the era of George W. Bush, who again invested in this approach to hone soft power tools for use in overthrowing regimes, together with sharpening “hard tools,” such as the invasions of Afghanistan and Iraq. The agendas of American institutions concerned with exerting influence in spheres where the U.S. was confronting regimes it classified as “rogue” required the expansion and diversification of these programs through civil society organizations. Following the collapse of the Soviet Union, the American empire was interested in feasible and inexpensive investment as opposed to direct military confrontation.

To avoid the exchange of political accusations that emerged between the Republican and Democratic parties following the Watergate scandal, Washington decided that both parties should manage NED, with a special division for each party within the institution: the National Democratic Institute and the International Republican Institute. The name of the institution changed several times, and one of its founding groups was called the American Center for International Solidarity in Action, known as the Solidarity Center. The Solidarity Center emerged from the so-called Free Trade Union Institute, founded in 1977 and administered by the main trade union federation of the United States. Alongside this falsely labeled “union” construct, the neoliberal mind created a parallel entity called the Center for International Private Enterprise that openly represented the interests of companies owned by bipartisan capitalists.

NED is registered as a nonprofit organization under Section 501(c) of the U.S. Internal Revenue Code, which provides that organizations eligible for nonprofit status are “prohibited from directly or indirectly participating in, or intervening in, any political campaign on behalf of (or in opposition to) any candidate for elective public office.” However, paradoxically thanks to American insolence, NED’s main mission is political interference in the affairs of other states and the overthrow of regimes as it suits American interests.

The first missions Americans probably conducted through NED within the Soviet sphere of influence took place in Poland with the support of the anti-communist Solidarity movement. In Poland, and in many Central and Eastern European countries, NED has been participating since the 1990s with other institutions and organizations, including the George Soros organization, in shaping government systems in line with American interests through the IRI and the NDI. In their paper “Template Revolutions: Marketing U.S. Regime Change in Eastern Europe,” Gerald Sussman and Sascha Krader, American researchers at Portland State University, argue that one of the keys to defeating a leader Washington deems unworthy in any of the former Soviet republics is to unite the disparate opposition behind a political candidate. The IRI and NDI moved freely across Eastern Europe using this tactic. The first example of it took place in Bulgaria in 1996, where the IRI and the NDI “discovered” that “NGOs could tilt an election in favor of America’s preferred candidate” by uniting the opposition, and then funding opinion polls that supported the nonprofit’s candidate and exerting influence on the newly elected politicians by drawing on different election experiences over the years. NDI contributed to this project by funding the Bulgarian Association for Fair Elections and Civil Rights to oversee opinion polls that year.

According to Sussman and Krader, NED and its affiliates managed opinion polls in Romania in 1997 with the support of the Pro Democracy Association. The strategy continued in Slovakia, in 1998, where IRI conducted a “parallel counting of votes,” and in Croatia, in 1999, in partnership with the U.S. Agency for International Development and Freedom House, along with other international funding for a poll monitoring group nicknamed GONG, which stood for a Croatian group of citizens organized to oversee voting. In the former Yugoslavia, when Slobodan Milosevic appeared to be in danger of defeat ahead of the 2000 presidential election, the NDI arranged for Serbian opposition party leaders to travel to Poland to “seek advice” from Polish party activists who had defeated left-wing parties in previous elections. NDI hired the U.S. polling firm of Penn, Schoen & Berland, which concluded that the anti-communist constitutional attorney Vojislav Koštunica would be the best bet to run against him. Based on this recommendation, Secretary of State Madeleine Albright and German Foreign Minister Joschka Fischer summoned the two presidential candidates, Belgrade Mayor Zoran Đinđić and opposition party leader Vuk Drašković, to Budapest and pressured them into withdrawing from the race. IRI and NDI issued similar directions in Bulgaria and Romania, prompting pro-Western party leaders to acquiesce in Washington.

These are just some of the stories about NED and how its affiliates invested in local organizations and associations to influence the election results of Eastern European countries and shape their regimes in line with the American agenda. The foundation has steadily worked to meet the same objective in Africa, Latin America and Asia.