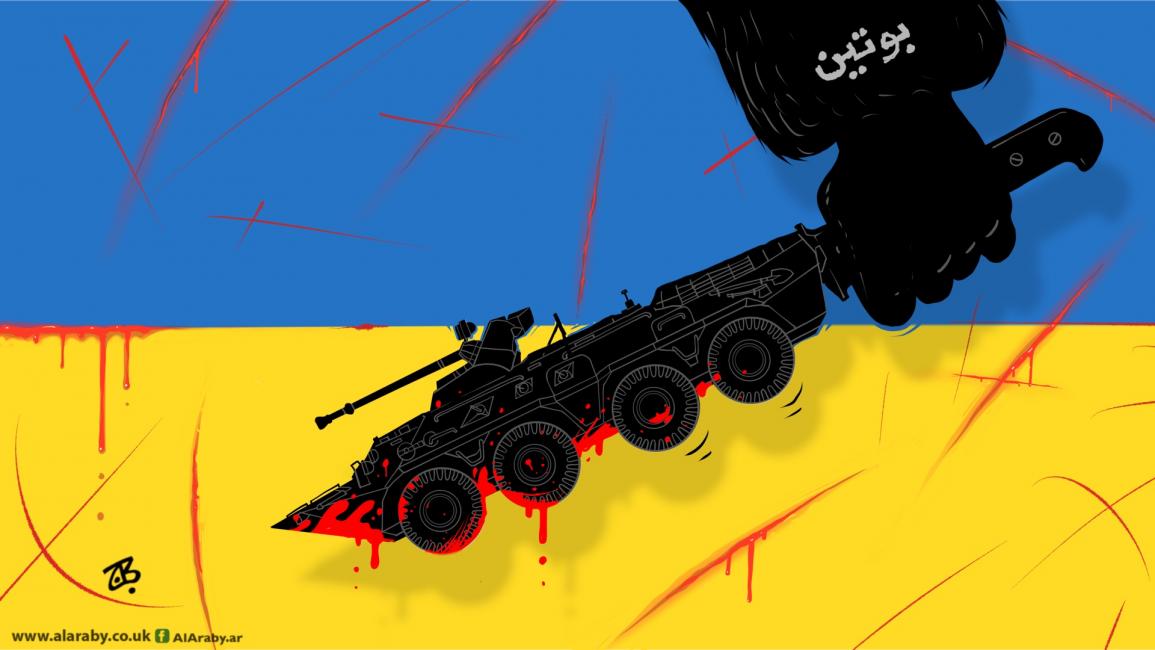 Russian President Vladimir Putin is busy invading Ukraine and spreading all forms of death and destruction to force Ukraine back into Russia’s fold. He has thus far displaced 1.5 million Ukrainians, for whom tents have been erected, aid is being delivered and all of Europe has become mobilized. Putin, singing to the tune of nuclear war, has sabotaged the entire world — everyone is reeling under the soaring prices of oil, bread and other essential goods — and it seems as though Europe has just woken from a short nap to discover that it has given him too much leeway.

As we all watch Ukraine’s youth, elderly, regular army and civilian paramilitary units stand up to Putin, the world is amazed to discover a united and strong Ukrainian national identity rising above all differences, regardless of whether these differences are between Ukraine’s Roman Catholic, Greek Orthodox and Jewish communities; east and west; rural and urban centers; or Russian-speaking and Ukrainian-speaking citizens.

Yet, while all of this is happening, commentators who have placed themselves in the service of the Iran-led rejectionist axis since that axis achieved its so-called victory against the peoples of the Middle East have been focused on one thing: America, which these writers have hated since they were children.

Hezbollah Secretary-General Hassan Nasrallah encouraged those writers, although their reactions are so automatic that they probably didn’t even need encouragement. Of Putin’s invasion of Ukraine, Nasrallah said, “It is a lesson for anyone who trusts, relies on or bets on the United States. The U.S. administration is responsible for the tragedy currently unfolding.”

As usual, Nasrallah used the main event as a talking point to address his friends and enemies alike, be they in the government or part of the opposition. He blamed the Americans for Putin’s invasion of Ukraine not in the sense that the Americans cut Putin too much slack, but rather in the sense that the Americans will always be the epitome of evil. Nasrallah supported his claim with allegedly documented information that NATO, another of America’s demonic tools, was “planning to launch a third world war using nuclear weapons against Russia.”

At that point, all the rejectionist commentators unleashed their skills. In keeping with Russia’s official dictate, they began referring to the Russian assault on Ukraine as a “military operation” or a “limited” operation, oblivious to the contradiction between that term and the fact that Ukrainians are being killed and Europeans are terrified. The same observers turned their attention once again to America and how this “rapacious beast” or “white beast” is dominating the world and “expanding across the Arab world.” They pointed out that the massacre of Chechen civilians happened under former Russian President Boris Yeltsin, a president they say was a puppet of the U.S. empire, and did not happen under Putin. They also pointed out that America invaded Iraq and Afghanistan and argued that “Western intelligence circles planned this war” and that “the most dangerous form of totalitarianism is American totalitarianism,” etc.

Then they moved on to the ripe topic of racial discrimination; how the West is displaying a greater level of racial oppression and discrimination, and how America and the West are currently experiencing “a pivotal moment in their racism.” One such commentator looked closely at the faces of Ukrainian refugees and determined that the Western mobilization in support of Ukraine boiled down to an instinctive form of ethnic discrimination. He then went on to evoke the writings of Samuel Huntington and how they “exposed” the clash of civilizations and the clash between East and West.

There is a lot of truth in what Nasrallah and his media wing are saying about America being evil. We can conjure up a long list of tragedies that America, along with the West and the Zionist movement, have caused and continue to cause.

America’s monopoly of evil reached its peak during the Cold War, when America was a rising imperial power while Russia was deemed to be “a friend to nations.” (That so-called friendship was most likely duplicitous and mixed with enmity.) When the Cold War ended and the Soviet Union collapsed, the main headlines asserted that America was destined to be the world’s sole great power. Nowadays, however, American evil is no longer the world’s sole evil, and America is not as strong as before. If anything, America’s weakness created a vacuum that is now filled by a powerful China, a less powerful Russia and a far less global nuclear-powered Iran.

Regarding racism in the West, racism that is condemned like any other form of racism, the rejectionists ought to take a look at themselves, their officials, communities, milieus and even the milieus of their opposition. They are all racist. The long list of victims of their blatant or subtle racism includes Syrian refugees and Palestinian refugees before them, Bedouins, adherents of other religious sects, anyone who is from another village or area, ethnic minorities (in local parlance, to “Kurdisize” someone is to treat them with disdain), Ukrainian women, African and Asian domestic servants and dark-skinned people. (We refer to them as “slaves.”)

More importantly, it was Western media outlets that exposed and documented Europeans’ racist behavior on Ukraine’s border, and most of those outlets apologized for any racist behavior or comment, which is something that none of our bright commentators and writers would ever do when it comes to their own racist behavior, or that of their leaders and so-called strategic allies.

The rejectionists’ robotic reaction to anything that has to do with America and their instinctive hatred for America give us an idea about their state of mind. It is obvious that such people have grown mentally lethargic and lazy by force of having spent their entire lives regurgitating the same reaction and sentiment. It’s a special form of numbness, like having a continuous buzz in your ear that endlessly repeats, “America, damn you America!”

It’s also a simplistic way of shaping one’s view of life — any life, be it political and public, or personal and private. This view only paints the world in black and white. America is painted black and America’s enemies are painted white. It’s a cartoonish way to view the world, reminiscent of the enduring poster of Uncle Sam with his half-beard, tacky bulging eyes, top hat, frown and finger pointed at the viewer, with the U.S. flag shown in the background. When people with such a mentality turn the Russian invasion of Ukraine into an opportunity for pouring out age-old rage about America, in effect they use a double standard and say when it comes to Palestine, we support the people’s right to self-determination, but in the case of Ukraine, people have no such right.

Here’s a hint to help us understand what such people are thinking. They are very fond of power, its manifestations, so-called victories and its very logic. Their chests filled with pride, they boast about how precise their missiles are. Their words are ones of warning, retribution and threat. Look at how they talk about Russia’s “might,” its weapons, army, missiles and submarines, as if Russia were a saint. It is a cynicism that has nothing to do with the principle that their mentality is supposedly based on.

Taking pride in sticking to the same old idea is another characteristic of the how the rejectionists think and a clue to why this thinking is broken. It’s sentimental, nurtured by poetry, rhyme and an overflow of emotion. It is like an incantation of promise and threat that is chanted continuously to the point where it deadens one’s ability to think, all in the name of a moral value called loyalty. (Hezbollah’s parliamentary bloc is aptly named “Loyalty to the Resistance.”) Its basic premise is that upholding the same old opinion is a sign of loyalty, whereas changing one’s mind is treason.

Well, to this lot I say that your loyalty to the resistance has made you blind, or at least rendered you unable to admit that the Russian invasion of Ukraine has dealt a blow to American-Israeli relations, which your loyalty-bound self insists on describing as “organic.” The Russian invasion has even dealt a blow to the loyalty you have for the notion that Russia is “a friend of nations,” come what may.

How so, you ask? For one, Israel carries out its attacks in the Syrian heartland under Russia’s patronage or as part of an implicit Russian-Israeli agreement. The invasion of Ukraine put Israel in a tight spot because Israel’s priority is to protect its agreement and avoid angering Russia. Accordingly, Israel did not condemn the Russian invasion of Ukraine, at least not strongly enough as far as America is concerned.

Second, when it comes to nuclear talks between Iran and America, Russia has blocked the restoration of the nuclear deal unless its future dealings with Iran are exempt from U.S. sanctions imposed on Russia since its invasion of Ukraine. America rejected the Russian conditions. On the other hand, Russia’s invasion of Ukraine will effectively give Iran and its militias, which you are part of, more room and more clout in Syria.

So what will it be? Will you continue to describe American-Israeli relations as “organic” and the Russians as “friends”? And will you continue, over and over again, to place all the blame on America?