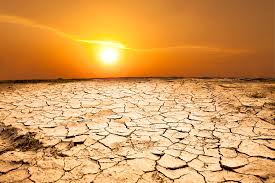 Their summer is our winter. In the American South, people spend the summer indoors. This is the season where parents watch closely when children play outside. It is the season where you have to be aware of the weather when you work outside and where 42 degrees Celsius with humidity can be just as dangerous as 20 below. Of course, from the Pacific Coast to the desert, from Colorado to the Prairies, the Central and Southwestern United States have always been challenging for the people living there. These regions have always dealt with regular, cyclic droughts — of the variety that could last one year or 10 and that can restructure society.

The terrible story of the Dust Bowl is there as a reminder. At the beginning of the 20th century, a series of political and economic events sent thousands of Americans to Kansas, Oklahoma, Missouri and Texas to farm the plains of the American Southwest, where the prairie grass was so thick that it only suited bison. But this human adventure came to an abrupt end when a series of droughts beginning in 1931 struck the plains and — for a decade — brought about a true climate disaster. When farmers were no longer able to farm the dry land, they left their harrowed and naked fields that were exposed to the hot, dry winds.

Constant, gusty winds kicked up dirt and created monstrous clouds of dust. For a decade, these “black blizzards” covered the prairie’s farms in sand and occasionally darkened skies on the East Coast. The return of the rains in 1940, new plowing methods and the drilling of wells in the Ogallala Aquifer put an end to this sad story — for a time. Climate change changes the game, meaning that cyclic drought is no longer the culprit. We are already seeing its effects. In Arizona, Phoenix is hitting record temperatures. California has wildfires year after year; they come earlier and earlier each year. But it is the Colorado River officially in crisis — the main water source for Las Vegas, Phoenix and Tucson (and, to a lesser extent, Denver, Salt Lake City, Albuquerque, Los Angeles and San Diego), the driver of agriculture from Arizona to the ranches of Wyoming and the key to hydroelectric production.

For the first time in the history of the United States, on May 3, the U.S. Bureau of Reclamation decided to change operations at some dams. In theory, between May and July, a blanket of snow upstream melts and replenishes the Colorado River. Today, dry grounds drink up the water from the thaw and it does not reach the river. With its diversions and pumps, the Colorado River is now just a shadow of its former self. Its levels are at record lows. This has ripple effects. Production of electricity could become unpredictable. The ability of consumers to access water downstream is affected, too. Exactly 100 years ago, states along the river shared the rights to this wealth of water, but today that situation no longer corresponds to the river’s reality. Water could be rationed or even cut off all together in some areas.

In the country’s West and Central Plains, frantically pumping the aquifers in order to solve the dryness problem is no longer conceivable, as it was during the Dust Bowl. They are all contracting — whether it be Memphis Sands, the one in the Central Valley or the vast Ogallala Aquifer. Their disappearance by the end of the century, according to the United States Geological Survey, will threaten food security across the continent. Considerable domestic migration is a result. We are already seeing people emigrate east from California, in the wake of wildfires these last few years. In Arizona, the rationing of water from the Colorado River has led to farmers leaving — and leaving behind farms that have been in their families for generations. Today, mobility is a luxury that the most vulnerable communities do not necessarily have. But there will come a time when we will only be thinking about survival.

Using an established tree-ring database, a team of scientists at NASA, led by Benjamin Cook, came up with projected drought cycle scenarios. In their paper in “Science Advances” in 2015, they mapped out the probability of parts of North America becoming a desert if we do not reduce greenhouse gas emissions. Their conclusions are definitive. By 2095, an area from California to Texas, from Arizona to Kansas, will be on its way to becoming an arid desert. This transformation will begin to disrupt human activity by 2070, as Timothy Kohler, Timothy Lenton and Marten Scheffer wrote in the Proceedings of the National Academy of Science in 2020.

The maps of Propublica show the limits of human survival in areas that will become inhospitable in a North America defined by lack of action on climate change. This will be to the point where, according to Abrahm Lustgarten, one of the study’s authors, the migratory flows of those fleeing drought on the one hand, and intense heat and humidity on the other, as well as extreme climate phenomena to the north and south, will end up colliding.

The United States has already seen this type of migration. The Dust Bowl put the country’s first climate refugees on the road, and it did not go well. Colorado’s governor at the time declared martial law in 1936 and deployed the National Guard at the state’s southern border, feeling that his state was unable to accommodate more refugees. California refused to fully accept them, denying “Okies” access to some areas, while employers exploited these newcomers from the east, an atmosphere depicted in John Steinbeck’s novels. In fact, without policies to fight climate change — like those called for in the latest report of the Intergovernmental Panel on Climate Change — there will only be more migration. Along with that, there will be divided communities, societies, growing inequalities and the accelerated erosion of the social contract. We would be wrong to think that these problems can be contained by closing borders.