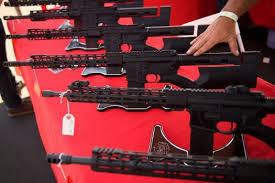 Mass shootings are America’s tragic “specialty.” Other countries that experienced similar massacres implemented new laws to restrict the purchase of weapons. In the U.S., this seems unattainable.

On Tuesday [May 24], 18-year-old Salvador Ramos fatally shot 19 children and at least two adults at an elementary school in Uvalde, Texas. This is the 27th such massacre in American schools since the beginning of 2022 and one of the largest mass killings in recent years. And the number of such shootings is increasing. Just 10 days ago in Buffalo, New York, 18-year-old Payton Gendron killed 10 people at a Walmart store.* The attack appeared to be racially motivated, as the victims were African American. In 2018, in Parkland, Florida, Nikolas Cruz shot 17 students, and in 2012 at Sandy Hook Elementary School in Newtown, Connecticut, another deranged shooter killed 26 people, including 20 children and six adults.

Mass shootings are America’s tragic “specialty.” After similar massacres in other countries, such as the United Kingdom, new laws were implemented restricting the purchase of weapons, especially by individuals who posed a risk to the safety of others. In the U.S., this seems to be unattainable. Although the number of mass killings is increasing, authorities have nevertheless relaxed restrictions on gun ownership over the last 20 years. For example, Congress failed to extend a 1990s ban on military-type semi-automatic weapons; the ban lasted for only a decade. In addition, many states have enacted laws to permit open carrying of guns in public. Federal law requires that a gun dealer first check that the buyer has no criminal or psychiatric record, but the law does not apply to online purchases or gun shows, mostly in rural areas, where it is estimated that more than 20% of weapons are sold.

These legal loopholes have been around for a long time, but all efforts to close them meet fierce resistance from Republicans in Congress because such restrictions are not welcome by the powerful National Rifle Association lobby, which brings gun manufacturers, gun dealers and gun owners together. The NRA is one of the most generous supporters of political campaigns. Republican senators receive millions of dollars each year for their election efforts.

The right wing argues that guns protect the right to self-defense, allegedly guaranteed in the Second Amendment to the Constitution written at the end of the 18th century.** But the amendment speaks of the rights of a “militia,” of what were voluntary local and state defense units intended to resist autocratic abuse by the federal government. The Second Amendment does not speak of individual rights. In fact, the expansion of this interpretation is culturally rooted in the heritage of the borderland culture, where the lack of sufficient state law enforcement apparatus forced citizens to fight crime on their own and defend themselves against Native Americans. One side effect of this interpretation is a tradition of violence that still exists in certain regions and a widespread use of firearms. More than half of all Americans own guns; some even own entire arsenals.

After the Uvalde massacre, Biden immediately delivered a statement, wringing his hands as usual over the tragedy and calling on Congress to pass stricter legislation. Democratic Senate Majority Leader Chuck Schumer presented a bill that would extend the period of criminal and mental health background checks and extend the requirement to certify gun buyers in online transactions and at gun shows. There have also been renewed calls to ban automatic offensive weapons. However, the day after the bill was presented, Schumer withdrew the proposed legislation, saying he did not expect to collect enough Republican votes for it to pass.

Congress tried to enact a similar law last year that would have removed the loophole that allows weapons to be easily purchased online and at gun shows and banned the sale of high-capacity ammunition magazines. The bill passed in the House of Representatives, where Democrats have a majority, but stalled in the Senate, where a minimum of 60 votes (out of 100) is required to pass anything other than the budget. Voting can be blocked by prolonging the debate indefinitely (the filibuster), and given that the seats between the parties are evenly divided, the Democratic majority hangs on the single vote of Vice President Kamala Harris. Schumer must have realized that, despite the death of 19 children, the Republicans would not budge. Republican Sens. Ted Cruz and James Inhofe bluntly said so after the killings in Texas.

US Democracy Leaves Much To Be Desired

The proposed legislation above restricting gun ownership has been described as “common sense” and, according to polls, is supported by more than 80% of Americans, including most gun owners and registered Republicans. The fact that Congress refuses to pass the bills is perhaps the strongest evidence that American democracy, to put it kindly, leaves much to be desired. Legislators are in the pockets of powerful interest groups and wealthy sponsors, whose preferences don’t match the interests and views of society as a whole. And it’s not just about access to guns.

Following the mass shooting in Uvalde, gun control activists urged Biden not to look to Congress for action, but to issue an executive order. Biden had done this before when he banned ghost guns, which are firearms, pistols or rifles that you can assemble from parts bought online. But the White House claimed its options here were limited and that only Congress could pass laws that would be more effective. Moreover, the next president can cancel an executive order with the stroke of a pen.

The Texas Massacre: What Will It Change?

Critics of such legislative initiatives point out that many of the perpetrators, such as the Uvalde killer, acquire weapons legally in gun shops subject to screening laws. Pistols and rapid-fire rifles are often bought by people — usually men — who have no public conviction records, no history of treatment for psychiatric problems and show no signs of psychopathic or criminal intent, although they tend to broadcast their intentions and plans on social media. Nevertheless, even partial restrictions on buying guns could at least prevent certain massacres.

On the other hand, the restrictions that have been proposed would clearly reduce the massive scale of U.S. mass shootings only in part. Radically reducing the scale of such mass shootings would require radical measures, such as confiscating most of the more than 300 million guns that Americans own. It is difficult to imagine this happening. The problem is that, in other highly developed countries, the principle of gun control is based on rationing gun licenses and granting permits only to those who can certify a genuine need for a gun. However, in the U.S., however, it is believed that everyone has the right to guns because everyone may need one. The Americans’ romance with guns continues; it looks like nothing is about to change.

The tragedy in Uvalde will not make a difference here, either. That is particularly true because the Congressional midterm elections are less than six months away and candidates need money to run their campaigns.

**Editor’s Note: The Second Amendment provides: “A well regulated Militia, being necessary to the security of a free State, the right of the people to keep and bear arms, shall not be infringed.”

About Daniela Wojas 30 Articles
I am originally from Poland but currently residing in the United States. I received a bachelor’s degree in Classics and Ancient Mediterranean Studies from the University of Illinois at Chicago. I am passionate about languages, literature, and archaeology and would love to pursue a career in translation, especially in the literary field.