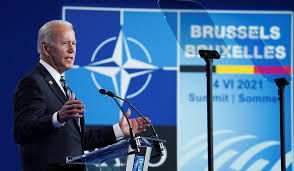 Assuredly, one of the most significant side effects caused by the was in Ukraine is how it has rearranged American priorities.

In terms of international politics, Joe Biden took office with two main objectives. First, he intended to prioritize new issues, such as the environment, over traditional issues such as security. Second, he sought to restore the influence of the United States in the most important regions of this century, such as Asia, to counterbalance China’s expanding regional and global power.

However, the war in Ukraine has generated a sense of urgency and heightened risk. An unwanted conflict that needs attention has upended Biden’s plans.

Since the war began, Biden has viewed the crisis in Eastern Europe as an opportunity to demonstrate his leadership and America’s commitment to its allies and to multilateralism, issues that were part of his presidential campaign.

Biden had a rapid and specific response to the conflict internationally, urging the reinforcement of NATO together with increasing trust among America’s historic partners. Domestically, Biden has worked in part to stem the slump in his popularity and declining approval ratings.

Nevertheless, the long-term effects of recent events are relatively limited for the United States. The country remains incapable of avoiding an agenda that places the military at the center of the public debate. Nor can it define, on its own, the geopolitical axis around which it intends to gravitate.

Quite the opposite. The United States either remains tied to the consequences of actions it has taken in the past or intervenes in the crises of others, from which it cannot escape. The U.S. entered this century recognizing the importance of looking to Asia, but it has never been able to implement a cohesive strategy for properly doing so. First, Asia shared attention with the tensions in the Middle East, especially in Afghanistan, Iraq and Syria. Now, the country is focusing on managing the situation in Europe.

In political terms, the expected side effect of turbulent times is seeking a safe and well-accepted discourse for domestic consumption. Hence, the U.S. government tends to cling to an old obsession: the international export of its own values. The problem is that perhaps the world of 2022 is no longer capable of dealing with this.