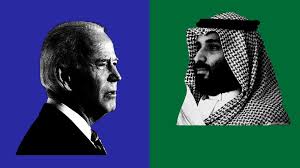 President Joe Biden has completed his first official visit to the Middle East. His meeting with Saudi Arabia’s Crown Prince Mohammed bin Salman was notable both for marking a backslide on human rights and for its lack of progress in establishing peace in Palestine. It is imperative for the United States to return to its principles and prioritize human rights and democracy.

Biden’s visit to Saudi Arabia could hardly be described as a success.

Unlike the previous Donald Trump administration, Biden had put human rights and democracy at the forefront of his diplomatic efforts. The difference between their two approaches is startling when you consider how they dealt with the influential Gulf power of Saudi Arabia.

Jamal Khashoggi, a journalist who was critical of the crown prince, was killed by Saudi intelligence in 2018.

The Trump administration distanced itself from the incident at the time while Biden said that the crown prince should be considered a “pariah,” later releasing a U.S. intelligence report that suggested the crown prince was involved. This contributed to deteriorating relations between the two countries.

However, Russia’s invasion of Ukraine has caused gasoline prices to skyrocketing in the United States. In advance of the November midterm elections, the Biden administration is urgently looking to keep prices low, and Saudi Arabia is the only country with the capacity to increase crude oil production. “Begging for oil” has forced the U.S. to repair relations with the country.

President Biden said he addressed Khashoggi’s murder at the beginning of his meeting with the crown prince and condemned the killing. The crown prince responded by denying any involvement and pointing to America’s human rights abuse in Iran and Afghanistan.

Biden could not secure any definite promises on the increase of crude oil production. The only notable result was Saudi Arabian propaganda that they had been absolved of the incident at the meeting.

On Biden’s earlier stop In Israel during the trip, he agreed not to criticize Israel at the United Nations or in other forums, while offering no proposals to resume peace negotiations with Palestine.

Neither Saudi Arabia nor Israel have changed their approach to human rights abuses. America’s retreat from the promoting human rights in its relationships with these two countries clearly contradicts its strategy of encircling Russia and China. Double standards that prioritize domestic affairs will sow seeds of distrust across the world.

The U.S. prides itself on its leading role in promoting democracy. If it wants to continue doing so, it should not trade its principles for short-term gains.