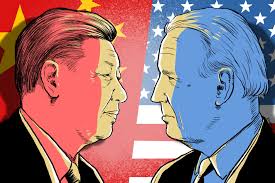 President Biden stated that “the United States strongly opposes unilateral efforts to change the status quo or undermine peace and stability across the Taiwan Strait.”

In response, President Xi, mindful of House Speaker Nancy Pelosi’s planned visit to Taiwan, strongly warned the U.S., “Play with fire and you will get burned. I hope the U.S. understands this clearly.”

Tensions have been growing over the Taiwan Strait, with Chinese military aircraft crossing the median line and U.S. Navy destroyers passing through. There is abundant concern that this could lead to an accidental confrontation.

The two leaders need to continue talking and make the utmost effort to avert a crisis.

During the phone meeting, President Biden indicated that he would respect the “One China” policy, which maintains China’s position that mainland China and Taiwan are indivisible.

During his visit to Japan in May, President Biden mentioned that the U.S. would be militarily involved in the defense of Taiwan.

It is likely that the U.S. aims to show it will not change in its basic policy regarding Taiwan and will avoid making relations worse, while at the same time it aims to deter China from changing the status quo by force.

President Xi was very insistent that Pelosi should cancel her visit to Taiwan.

The House speaker is second in succession to the president after the vice president. The speaker’s visit to Taiwan will be the first such visit since 1997, and is expected to damage President Xi’s image.

As mutual distrust grows, it is important to seek points of cooperation and trust. The fact that the two leaders agreed to continue communication is an achievement to some extent.

The U.S. will hold midterm elections in the fall. China is also scheduled to hold its Communist Party Congress, which is held every five years. Both leaders are keen to stabilize the U.S.-China relationship and focus on domestic politics for the time being.

Biden and Xi also discussed the situation in Ukraine, but did not disclose the content of that conversation.

China has shown a pro-Russian attitude. However, it is Russia that continues its aggression in violation of international law. President Xi, who has a close relationship with President Vladimir Putin, should be the one to push for a ceasefire.

The U.S. regards China as its only rival, but the Ukraine issue will require cooperation. If China provides Russia with weapons, the war will be far from over.

Since Biden took office, the two leaders have met by phone or online five times. In order to have a frank exchange of opinions, they need to meet face to face as soon as possible.