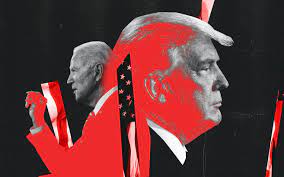 The president of the United States is presenting the November midterms as a new battle between democracy and Trumpist “semi-fascism.”

Less than two months from the Nov. 8 midterms, President Joe Biden is leading the Democratic election machine with a message meant to convey that the election will be a fight the entire country, not just the Democrats, will wage against the danger former President Donald Trump’s supporters pose to democracy. The campaign agenda was already defined earlier this month during Biden’s speech in Philadelphia, Pennsylvania. Solemnly staged, Biden asserted that Trump and Trumpist Republicans (whom he distinguished from the general party and its voters) “represent an extremism that threatens the very foundations of our republic.” Biden refrained from using a term he used in earlier remarks at a Democratic event in which he called Trumpism “semi-fascism.”

Biden is risking his presidency and is going to engage the media and the White House official agenda to seek voter support in the key states on which majorities depend. Pennsylvania, for example, presents the easiest chance for Democrats to win a Senate seat. Biden has also taken advantage of official events to ask for the vote in Wisconsin, Ohio and Michigan, risking criticism for a partisan use of his position. The president seems to have decided that the seriousness of the challenge is worth it.

The midterms serve as a plebiscite on presidential performance, and the incumbent traditionally does not fare well. In a normal election cycle, voters would consider rampant inflation, the substantial diminution of more progressive campaign promises and the chaotic withdrawal from Afghanistan. On the more positive side, voters might consider that Biden has restored a certain institutional normalcy, enactment of an ambitious law to fight climate change and the cancellation of student loans. However, 2022 will be a new referendum about Trump and his toxic influence on American democracy. The battle line will be drawn at nothing less than achieving a clean election, the management of which may be left in the hands of Trump-sponsored fanatics at the local level. Biden is legitimately stirring up concern about the threat that Trump embodies so he can revive the coalition of leftists and moderates that defeated Republicans and who are frightened by the illiberal drift that occurred in 2018 and 2020. At the same time, Trump and his people, with their systematic attacks on institutions (most recently the FBI after the agency searched Trump’s home), have only added to the reasons why Biden must defeat the Republicans. For the fourth time in six years, the United States faces another election with the same protagonist: Trump.