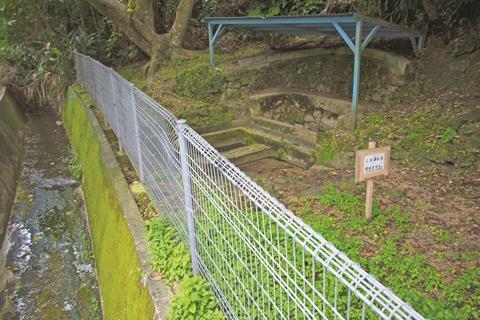 At Futenma Second Elementary School, located in Ginowan City adjoining U.S. Marine Corps Air Station Futenma, the soil was determined to contain levels of per- and polyfluoroalkyl substances (PFAS), an organic fluorine compound, that exceeded the standard levels set by the U.S.

The citizen’s group Ginowan Chura Water Association has requested that a prefectural environmental science center investigate. The same organization was also looking into the possibility of an influx of sewage inside the school from the airfield.

The U.S. Environmental Protection Agency (EPA) has established standard values of 38 nanograms of perfluorooctane sulfonate (PFOS) and 920 nanograms of perfluorooctanoic acid (PFOA) per kilogram; amounts beyond these thresholds require close investigation. In this case, the PFOS levels detected around the back gate area of the school were 29 times the U.S. threshold and 18 times at the back net on the south side of the grounds.

It is said that the back gate, where the highest PFOS levels were detected, is where the gardens are located in which the children raise vegetables and other plants as part of their classes.

Will this have an impact on children, who use the grounds to do things such as run foot races and work in the fields? Environmental pollution in schools, places that require the most safety and security, has dealt a shock to parents and other concerned parties.

The association has asked the prefecture and Ginowan City to investigate. But the government is reluctant, arguing that standard values of PFAS compounds and analysis methods have not been established in Japan.

Kouji Harada, an associate professor at Kyoto University who specializes in environmental hygiene, points out that “it is possible that children can inhale polluted soil through dust clouds.”

There are many fearful parents. Countries that provide military bases ought to implement health examinations and detailed soil inspections.

PFOS compounds rarely decompose in the natural world. They accumulate in the body, and it takes about four to seven years for the levels to drop by half. They are reported to be carcinogenic among other health risks.

In June of this year, the EPA drastically tightened the lifetime health advisory for PFAS in drinking water by 3,000 times. The EPA noted that “the levels at which negative health effects could occur are much lower than previously understood … including near zero for certain health effects.”

The Japanese government referenced the existing EPA guidelines to establish its own tentative guideline values of 50 nanograms per liter.

The PFAS levels detected in rivers surrounding Kadena Air Base, which provide drinking water for seven municipalities, including Ginowan, Okinawa and Naha, greatly exceed the values outlined by the new U.S. guidelines.

The U.S. military uses the heat-resistant PFOS as a firefighting foam that works well against aircraft fires. The problems with the substance are not just limited to the areas around Futenma.

Last month, the prefecture and five municipalities that house bases requested that U.S. forces stationed in Japan and the Japanese government allow them access to the bases, but so far there has been no concrete response.

Even going by the Status of Forces Agreement and environmental supplementary agreements, the latter of which the Japanese government touts as a “substantial revision,” the possibility of implementing on-site investigations is up to the judgment of the U.S. Even water and soil collection depend on the U.S. Since the environmental supplementary agreements came into effect in 2015, there have been only two on-site investigations allowed. In one case, it took 18 days after an accident to collect samples.

In order to protect the safety of children and the water supply for prefectural citizens, it is essential to investigate pollution sources of soil and underground water from inside the bases.

How can we come up with a concrete response to environmental pollution deriving from military bases? This is a critical issue that ought to be asked during the gubernatorial elections and Ginowan mayoral election on Sept. 11. We want the candidates to discuss the path forward.