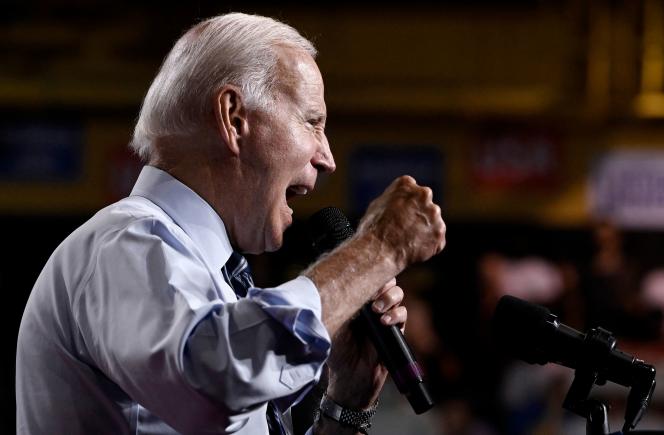 By pointing the finger at pro-Trump supporters and identifying them as a domestic threat, the president of the United States wants to convince undecided voters that the November midterm elections pose an existential choice.

During the Cold War, America’s enemy was communism. In the post-9/11 era, it was Islam. Today, the United States faces a new and formidable threat: one that comes from within. A part of the country is drifting, damaging its soul, its values and its political system. That’s the conclusion drawn by Joe Biden, about 50 days before the Nov. 8 midterm elections. To characterize this threat represented by “MAGA Republicans” (an acronym of Donald Trump’s slogan, “Make America Great Again”) the president went so far as to declare on Aug. 25 that it was “like semi-fascism.”

The term is surprising. First of all, how can one be fascist by half? It seems that the president either doesn’t fully endorse his semantic audacity or else fears a complete break with this part of the American population. On the Republican side, Biden’s calculations barely registered. Everyone claimed to be offended, thus avoiding questioning the party’s inclination toward extremism. Fox News’ star host, Tucker Carlson — who legitimized on-air the racist “Great Replacement” theory supposedly threatening the white Christian population — claimed that the Democratic president’s remarks were “a declaration of war against half the country.” Yet Biden has focused at length on the toxic role of only a minority of the Republican Party. And there was never any question of war, only of a civic mobilization to defend American democracy at the ballot box.

One thing is sure since Trump left the White House: The former president is a danger to American democracy. The House Select Committee to Investigate the January 6th Attack on the United States Capitol has articulated a damning political indictment, showing that Trump tried to prevent a peaceful transition of power and organized a campaign of lies and intimidation to that end, leading to the assault on the Capitol. His contempt for the rule of law, the key role he played in the rise of verbal violence, and his complacency when it comes to calls for physical violence are well documented. The more his legal troubles worsen, the more it becomes clear that he pushes ahead regardless. He no longer just blinks at the conspiracy movement QAnon. At a rally in Pennsylvania on Sept. 3, he called Biden an “enemy of the state” and federal investigators “vicious monsters.”

A generation of activists, candidates and elected officials have emerged in Trump’s wake. They have developed a type of political stance and identity that separates them from the traditional Republican apparatus, seen as a club of soft traitors, and from the “enemy” side that demonized world of “leftists,” Democrats, teachers, trade unionists, homosexuals and lax proponents of delinquency and immigration. According to the site FiveThirtyEight, among the 552 Republican candidates running for office in November, 201 outright reject the outcome of the last presidential election. Faced with such a situation, in which Grand Old Party officials, with rare exceptions, have become both clients and hostages, the Democratic base has long expected the White House to get tough.

Even tempered as “semi-fascism,” the use of this historically charged term is meant to energize the electoral base already on board, but most importantly to convince undecided voters that the upcoming election will be existential. Biden has therefore put aside his original intentions — to reconcile the nation, to heal the wounds of the Trump era — to impose a form of referendum on American democracy and his predecessor. This calculation seems to be relevant for the time being, judging by the Democrats’ rise in the polls.

But the use of the word “fascism” confirms everyone’s convictions while maintaining the partisan stigma. It leaves two Americas ignorant about and detesting one another, when in reality there is a silent majority of pragmatic citizens on fundamental issues; a silent majority in favor of more controls and restrictions on the purchase of firearms, and of lower health care costs and the right to abortion.

Paranoia Is Met with Contempt

More broadly, it is fascinating to see how much the Democrats have given up on convincing the other, more conservative, Christian, often impoverished America and on campaigning in small, remote towns and rural areas. The paranoid prejudices cultivated by the MAGA world are often met with contempt from others. As if geographical and social separatism had also become a fact.

During her 2016 campaign, Hillary Clinton, before apologizing, referred to the “basket of deplorables” made up of half of Trump’s supporters who allegedly were “racist, sexist, homophobic, xenophobic, Islamophobic.” In 2008, the same Clinton had criticized her young rival for the presidency, Barack Obama, who had explained that in some small towns in the Midwest, decimated by deindustrialization, people “get bitter, they cling to guns or religion or antipathy to people who aren’t like them or anti-immigrant sentiment or anti-trade sentiment as a way to explain their frustrations,” he said, before immediately being criticized for elitism. His observation was not wrong. His comment was unwelcome. What has changed in 14 years? The online engagement of those “deplorables,” and the influence of those who are leading them to the brink. Biden’s bet? That the sectarian drift will doom the MAGA world to electoral defeat, leading to the implosion of the Republican Party.

*Editor’s Note: The complete version of this article is available in its original language with a paid subscription.