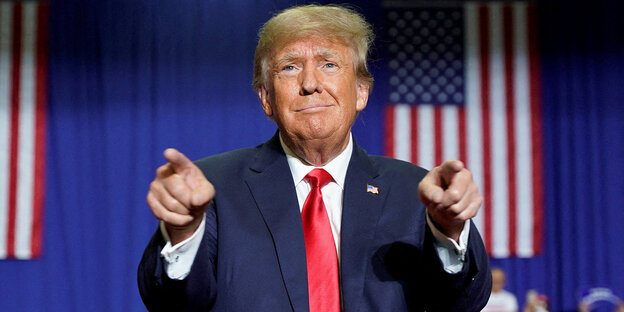 Donald Trump’s renewed candidacy is a frontal attack. The consequential power struggles in his party are a gift for the Democrats.

The fact that Donald Trump is running for president for the third time is no scoop. The 76-year-old talks a lot about his “movement” and uses a collective “we,” but he essentially engages in politics in the first person. He sees himself as the one indispensable man who alone can save the U.S. This messianic bid for leadership is reinforced by his attempt to use the publicity of a new campaign as a shield, because he now faces many investigations related to corruption, tax evasion and pressure on election workers.

Trump’s candidacy is a frontal attack. At the same time, it’s a skilled move against rivals from his own party. Once again, he has managed to concentrate the media’s attention on himself, putting all other Republican presidential candidates on the defensive. In the time it takes for them to promote their own candidacies, he can tour throughout the country without competition.

Historically, Trump fulfilled his role in the Republican Party a long time ago. He has given the party an extremely conservative majority on the Supreme Court for the long term as well as numerous young, conservative judges in federal courts all over the country. He carried out the most pro-business tax reform long ago. He has undermined environmental laws, promoted fossil fuels, set climate policy back by years and was responsible for a de facto ban on abortion in numerous federal states. He has also made an authoritarian form of politics socially acceptable. And he has brought a generation of Republicans keen on continuing his policies into Congress and other elected institutions.

Under Trump, the entire Republican Party has drifted far to the right. The midterms have at last energized the party leadership and driven them to search for their place in the future. After having followed Trump for years — even into the darkest corners of his conduct, including lies that have weakened faith in democracy and calls for a revolution — the party leadership now wants to marginalize him and his many imitators in the party as much as possible.

The power and generational struggles in the Republican Party are not necessarily a handicap for Trump. He conducted his first presidential campaign against the opposition of old leaders and party structures when he started.

But for the Democrats, the power struggles among those running for office are a gift. They have probably lost the House of Representatives in the midterms, but they managed to win the Senate along with many governorships.

Now, they are hoping that Republicans —united as an army under Trump — get lost in the heap of rubble he leaves behind.