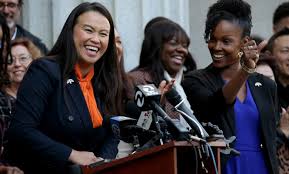 Of Hmong origin, an ethnic minority scattered between the mountains of China and some Indo-Chinese communities, 37-year-old Sheng Thao arrived in America as a child refugee fleeing a Laos devastated by genocide.*

Following Kamala Harris, has another political star from Oakland been born? The turbulent California port city overlooking San Francisco Bay is tired of dealing with violence and crime, and given its endless tent cities of the homeless, it is an island of deprivation in the super wealthy Bay Area stretching to Silicon Valley. However, it is also a young city — host to students at the nearby University of California, Berkeley, who do not have the support of wealthy families but are lively and determined. Harris is from here and returns often. In a United States divided between a radical right that is hard on immigrants and, in most cities, does everything it can to distance itself from the unhoused and a political left that proclaims tolerance without confronting social issues and problems of coexistence, Oakland has had the courage to elect a mayor who was once homeless. Of Hmong origin, an ethnic minority scattered between the mountains of China and some Indo-Chinese communities, 37-year-old Sheng Thao arrived in America as a child refugee fleeing from a Laos devastated by genocide.*

Fifteen years ago, fleeing this time from an abusive partner, Thao lived in her car for a period with her newborn child but never lost hope. Not only did she succeed in finding a decent job and putting a roof over her son’s head, she also became involved in social issues and then in politics. First, she ran a food pantry while at UC Berkeley, then interned at the office of Vice Mayor Rebecca Kaplan. Thao became Kaplan’s chief of staff and was elected as an Oakland councilmember. During the pandemic, she was popular for organizing the distribution of vaccines and masks but also for creating a home food delivery service for the elderly. Despite being a progressive, Thao ran in the electoral campaign against another moderate Democrat on an anti-crime platform that included reinforcing the police and succeeded in convincing the majority of voters that Oakland could manage the homeless emergency. Her plan envisions the construction of 30,000 homes in eight years. In the meantime, the homeless will leave the encampments under the freeway overpasses and move to parking lots equipped with camper vans and trailers, which the council promises to supply with water, sanitation, and garbage collection. An ambitious, yet practical plan. And for now, the city is supporting her with enthusiasm.