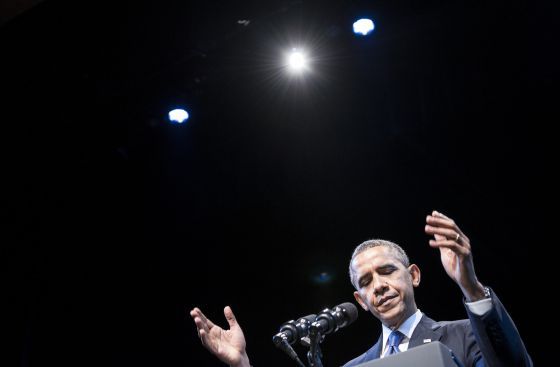 The international coalition to defeat jihadi fighters emulates the one formed by George H.W. Bush in 1991 against Saddam Hussein.

Everything about Obama’s address to the nation this Tuesday — the tone, the rhetoric, the strategy — was reminiscent of George Bush, George Bush Sr. President Obama announced increased U.S. intervention in the Middle East to combat Sunni jihadi fighters of the Islamic State. Jihadi advances have forced the world’s leading power, reluctant to reinvolve itself in war after the Iraq fiasco, to return to the region.

Following the execution of two U.S. journalists, murmurs of war began to spread throughout the press and televised debates, think tanks and Capitol Hill. Obama, who is thought to have put an end to a war that has lasted more than a decade, is running the risk of ending his presidency, in 2017, with the country [still] at war and Islamic terrorism — which he believed had been defeated — stronger than any time since 2001.

How to return to the Middle East without recalling George W. Bush? The answer is ... by taking inspiration from his father, George H.W. Bush. The former was president between 2001 and 2009, the latter between 1989 and 1993.

Bush Junior, who ordered the invasion of Iraq in 2003, acted unilaterally in the Middle East. In 1991, Bush Sr. led one of the biggest coalitions in history to eject Saddam Hussein’s Iraq out of Kuwait.

The son, in the years following Sept. 11, was guided by his instincts. He divided the world into enemies and friends, and saw few limits to the capacity of his country’s armed forces to change the world. The father put the brakes on U.S. power, and according to his critics, overcalculated his decisions, letting Saddam go free. One hundred and forty-eight Americans died in combat during the Gulf War. In Iraq, following his son’s invasion, more than 4,000 died.

Bush Junior surrounded himself with neoconservatives who reapplied idealist tradition to U.S. foreign policy: The U.S. had to use force to spread democracy and human rights. Bush Senior was opposed to adventurism and addicted to realpolitik — the realist school: The U.S. should safeguard its interests and take part in the game of balancing powers.

The wording of Obama’s speech, too, was reminiscent of Bush Senior. When he said, for example, that, “America will lead a broad coalition to roll back this terrorist threat,” or when he stated that the mission in Iraq and Syria shows American leadership “at its best,” and “we rally other nations on behalf of our common security and common humanity.”

The key words here are “lead” and “coalition.” Like Bush Senior in 1991, Obama is seeking allies — Arab and European — with whom to go to war. As then, the U.S. is leading the coalition. The wars have almost nothing in common: Then, the U.S. sent more than 700,000 soldiers. Now, that number is scarcely more than 1,000. But they are similar in style and method.

The speech served to explain what the U.S. will and will not do. There will be no involvement of combat troops as in 2003 or 1991. The intervention will not be unilateral. It will not be Iraq or Afghanistan, Obama said, but will be more like the aerial interventions the U.S. has been carrying out for years in Yemen and Somalia, with barely any public scrutiny, or the media circus and diplomatic drama that surround the intervention in Iraq and Syria.

It is not wholly George Junior.-esque, no, but neither is it purely Obama’s style: he who states that military solutions do not exist, that the U.S. should be devoted to solving its own problems and not those of others, and who believes that the top priority should always be Asia and not the Middle East or Europe. The Islamic State in the Middle East and Vladimir Putin in Ukraine force the re-evaluation of withdrawal. The idea of “leading from behind,” — a phrase coined by one of Obama’s advisers to describe the secondary role of the U.S. in the Libyan civil war in 2011 — has been buried. Now, they will lead from the front.

Whether it will work or not is uncertain. Whether or not Obama will build an effective coalition remains to be seen. Given the recent track record of U.S. armed interventions, if the strategy is able to defeat the Islamic State, it would be a remarkable novelty.

The legacy of Bush Junior follows Obama. His wars — Iraq and Afghanistan — are now Obama’s wars, and with the lack of any clear time frame, it is possible that they will become the wars of his successor. Islamic terrorism, the main concern of George W. Bush, is also Barack Obama’s main concern, and perhaps, it will be for his successor too.

Obama’s response seems to be: Yes, I am returning to the Middle East, although I am not Bush Junior, but Bush Senior. Evoking the ideas of Bush Senior allows Obama to combine his tendency toward caution and the U.S. citizens’ tiredness of wars without victories with the demand — both inside and outside of the U.S. — for more U.S. presence throughout the world.

It is known that Obama admires both Bush the patriarch, and also, his national security adviser, Gen. Brent Scowcroft. David Remnick, editor of The New Yorker, explained the matter this summer in an article. The feeling is apparently mutual.

Last December, in a conversation in his office in Farragut Square, in the center of Washington, Scowcroft who, like the Bushes is a Republican, had no problem praising Obama, the Democrat. When discussing his relationship with the Bushes, the old general, who was critical of the invasion of Iraq, replied: “Bush, Senior is one of my dearest friends. I am not so well acquainted with his son.”*