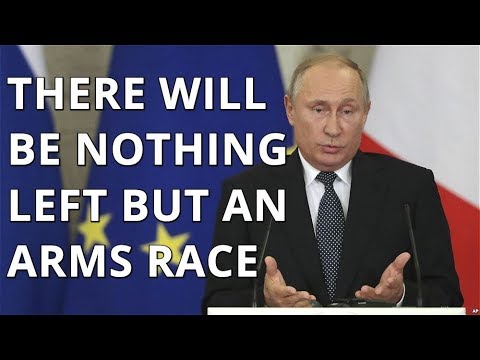 Ten days ago, in the midst of the crisis caused by the Jamal Khashoggi affair and the U.S. reaction to it, Donald Trump announced that the U.S. would withdraw from the anti-nuclear agreement it had signed with Russia in 1987. The so-called Intermediate-Range Nuclear Forces Treaty was signed by Ronald Reagan and Mikhail Gorbachev two years before the fall of the Berlin Wall. It was considered a historic moment because it de-escalated the Cold War. According to this agreement, the two countries − which still possess 90 percent of atomic weapons − agreed to eliminate nuclear ballistic and cruise missiles with ranges from 500 to 5,500 kilometers (300 to 3,417 miles).

The need to curb the arms race is just as relevant today as it was then. But the global picture has obviously changed. In a general sense, this is because the so-called end of history theory expounded by Francis Fukuyama in 1992, when the collapse of the Soviet Union led to the seemingly irrefutable supremacy of the United States, has given way to a multipolar situation in which Russia has recovered lost ground and China has transformed itself into a highly ambitious giant. The situation has also changed more specifically, in particular with respect to the matter of compliance with what was agreed to in the INF. President Barack Obama had already condemned Russian violation of it. Now Trump is condemning Russia’s actions and has gone further by proposing a withdrawal from the agreement made in 1987.

It is more than likely that the current climate would prompt a revision of the INF, or, in other words, an updated version of it, as the various forms of nuclear arsenals in the world have evolved. However, this would require a certain degree of understanding between the United States and Russia, which at the moment does not exist. But, while it would be one thing to jointly redefine the treaty in order to tailor it to the new reality, it is another matter entirely to unilaterally abandon it on the pretext of non-compliance. The consequences of this decision, which is supported by current U.S. National Security Advisor and hawk John Bolton, who was responsible for communicating it to Vladimir Putin last Tuesday in Moscow, could be the opposite of the desired outcome.

The first point to highlight is that nuclear disarmament is as desirable an objective today as it was 30 years ago. And, just like then, this is a matter not only of ethics but also of pragmatism. Our lives could depend on it. Second, U.S. withdrawal from the INF will give Russia free rein to pursue its arms race completely unrestricted. Third, it would allow Russia to label the U.S. as the main instigator of a new arms race. It does not look as though such an outcome would be regarded as positive. The current U.S. president’s decision does not, therefore, give the impression of having been well thought out.

In the almost two years that he has been in the White House, Trump has at times displayed fickle behavior: the decisions he announces with great fanfare one day, as though they were central to his presidency, can be rescinded shortly afterward. If only this were the case with respect to his proposed abandonment of the INF. But if it were to go ahead, it would be sufficiently serious to give Europe and the United States’ allies cause to redouble their pressure on Trump in pursuit of a more sensible solution with regard to averting the nuclear threat. It may be necessary to update the INF, but abandoning it just like that could do more harm than good.