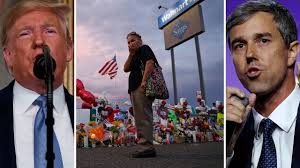 More people die from murder in America than in Yemen. This didn’t start with Trump, but his hate speech against minorities repeated over and over again encourages this and other carnage.

The district attorney of El Paso said he will investigate the killing as an act of domestic terrorism. What happened in El Paso and a few hours later in Dayton is clearly terrorism. Investigators suspect it is also a hate crime. A manifesto allegedly written by the shooter says he wanted to wipe out immigrants.

Carnage is quite common in the U.S., where the powerful American organization that defends free use of guns has gained strength since Donald Trump was elected. This year, the president signed a law that allowed people with mental illness to have access to guns more easily. Interestingly though, the White House refused to reveal a copy of the official agreement.

More people die from murder in America than in Yemen. This didn’t start with Trump, and all former presidents who couldn’t face the powerful gun lobby which advocates free use of guns are jointly responsible. However, Trump’s hate speech against minorities repeated over and over again vigorously encourages this and other carnage. Beto O’Rourke, a Democratic candidate for president, yesterday called Trump a white supremacist. Cory Booker, another Democratic presidential candidate agreed, and holds Trump accountable for the massacre. Indeed, only a white supremacist would have addressed four non-white congresswomen, as he did last month, telling them to go back to where they came from. Trump’s entire language is an incitement to hate crimes. Trump is a responsible party in this weekend’s slaughter.

However, he is not the only one responsible. The U.S. Senate, which refuses to face the powerful gun lobby, is also responsible for this carnage. In the 21st century, the U.S. maintains laws that date back to the days of the Wild West, and given the continuous failure to act, the U.S. still deals with killings as a routine matter, just like they did in the old West. Elizabeth Warren, one of the Democratic presidential candidates, demanded “urgent action to end the gun violence epidemic.” She didn’t specify any particular urgent action. Bernie Sanders went further and called on the Senate. “After every tragedy the Senate, intimidated by the NRA’s power, does nothing. This must change,” Sanders said.

In the meantime, the white supremacist president offered condolences to the families on Twitter, but didn’t show up in public. He must be playing golf. In May, at one of his rallies, he asked the audience what he could do to stop immigrants at the Mexican border. One member of the audience said to shoot them. Trump laughed. It was recorded on tape and is now forever history.