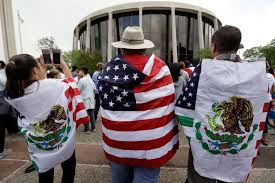 The Americans have dominated their southern neighbor Mexico since the 19th century. Trump is counting on this dynamic in his politics of migration. But he will not be able to achieve a sustainable solution this way.

President Donald Trump has made ending immigration across the U.S.’s southern border one of his political priorities. In his rhetoric, he does not shy away from depicting the migrants with dramatic images as criminals and as deadly threats to the American nation.

In the current controversy surrounding the mass migration of Central Americans to the United States, it has been completely forgotten that migration originally ran in the other direction. At the time of Mexican independence from the Spanish colonial empire in 1821, Texas and large portions of what is today the southwest of the United States belonged to Aztec country. Because of the sparse settlement — historians speak of less than 5,000 people in all of Texas — the Mexican government strategically encouraged immigration by settler groups. At the time, this was particularly attractive for Anglo-Saxons from the United States, whereas few inhabitants of the core region of Mexico could be moved to migrate there. The Mexican government quickly lost control over the settlements, and it is estimated that by 1834, four times as many Anglo-Saxons as Mexicans lived in Texas. Political and cultural differences with the central government fostered the rise of a separatist movement. After a brief war, Texas declared itself an independent republic in 1836. In 1845, it joined the United States as the 28th state.

A formative event for the unequal relationship between the two countries, which occurred not long thereafter, was Mexico’s resounding defeat in the Mexican-American War of 1846-48, when U.S. President James Polk’s troops succeeded in taking Mexico City. In the Treaty of Guadalupe Hidalgo, Mexico was forced to cede approximately half its territory to the United States — including Texas and the states of California, Arizona, New Mexico, Nevada and Utah.

The relationship between the two countries has been characterized by an asymmetry of power ever since. The United States undoubtedly dominates this relationship, but lately economic power has played a more decisive role. The Mexicans are very vulnerable to American tariffs, given that 80% of their exports went to the U.S. in 2018.

In recent months, Trump has shrewdly used Mexico’s economic dependence and that of the smaller Central American countries to pressure them to stop the stream of migrants well before they reach the American border. He threatened Mexico that he would raise tariffs on imports into the U.S. by up to 25%, and he cut economic aid to Guatemala, Honduras and El Salvador.

Trump’s massive economic threats made their impact. Mexican President Andres Manuel Lopez Obrador — a left-wing populist and nationalist from whom pushback was expected — pragmatically complied with Trump’s “wishes.” The Mexicans removed security forces from other tasks, such as fighting drug crime, in the country’s interior to send them to the southern border. However, they have managed to avoid thus far the safe third-country agreement that Trump demands, which would be difficult to pass in the Mexican Congress. Honduras, El Salvador and Guatemala already signed deportation agreements — the last by sidestepping the constitutional powers of the Guatemalan parliament, a move that apparently did not bother Trump.

After a few months, changes in migration numbers already appear to prove Trump correct. The number of migrants taken into custody at the American border dropped notably, from a peak of 155,000 in May to 51,000 in August. But this is still much higher than the corresponding numbers in the past three years. Trump can present this development to his voters as a major success. But how sustainable is his solution?

The origins of the current migration are not found in the difficult internal situation in Mexico or lack of border control in that country. The migration of Mexicans to the U.S. has been dropping steadily for several years. The basic cause of contemporary migration is much more likely to be found in the fact that, just 1,500 miles south of the prosperous U.S., one finds Central America, one of the poorest and most violent regions of Latin America. Another catalyst is the fact that the protracted process of claiming asylum in the U.S. makes migration financially appealing, even when that asylum claim is eventually rejected.

To improve the long-term situation, Washington must first work toward improving conditions in Central America, in addition to reforming its own asylum procedures. The populations of Guatemala and Honduras, the origin countries of most migrants to the U.S., have doubled in the last 30 years from 13 million to over 26 million, without the number of appropriate jobs correspondingly increasing. The spiral of poverty and violence is thus unsurprising.

In addition to providing economic aid to these countries — which is naturally not a priority under a shortsighted “America first” stance — the Americans should pressure both countries to achieve good political leadership. Guatemala and Honduras in particular have experienced significant setbacks in the last two years on the road to achieving rule of law and democracy. The president of Honduras, Juan Orlando Hernández, ran again for office two years ago despite the constitution’s prohibition. Dubious circumstances surrounding the ballot count suggested electoral fraud, leading to days of street protests that claimed 33 lives. The U.S. Justice Department, moreover, possesses clear evidence that Hernández and his brother are involved in drug dealing.

In Guatemala, President Jimmy Morales threw the international judicial commission, the International Commission against Impunity in Guatemala, with whose help major strides had been made in fighting corruption in the last 13 years, out of the country. In doing so, he saved himself from the investigations being conducted against him. Moreover, the popular former Attorney General Thelma Aldana, who stands for the fight against corruption, was excluded from the recent presidential elections on specious grounds.

The Rule of Law Is Not an Issue

It would be in the U.S.’s long-term interests for Trump to have applied just as much pressure against these developments in Guatemala and Honduras as he has in achieving the signing of the deportation agreements. Democracy in both countries would thus be less damaged today — and thereby also mark the baseline for the fight against poverty. Governments that defy the rule of law or even collaborate with criminal organizations make any improvement of conditions in Central America improbable. A key factor in the democratization of Latin America in the last 30 years was the fact that, after the fall of the Soviet Union, dictatorships of any kind were no longer acceptable and were pressured by the U.S. and Europe. Trump apparently does not care about these new authoritarian developments, at least as long as it does not involve any left-wing dictatorships, such as those in Venezuela or Cuba.

But maybe it is impossible to stop the current migration movement from south to north anyway, just as it was in 19th century when it flowed in the opposite direction. The gap in prosperity on the American continent and the continuously improving travel possibilities suggest that migration will continue for the long term, continuing the “re-Hispanization” of the U.S. that has been underway for decades. Between the 1970 and 2010 censuses, the proportion of Latinos within the population at large has risen dramatically, especially in the southern border states, for instance from 14% to 38% in California and from 18% to 38% in Texas. In both states, non-Hispanic whites are now a minority. Trump’s policy of making threats may slow migration in the short term, but it is unlikely to have much impact on long-term development.