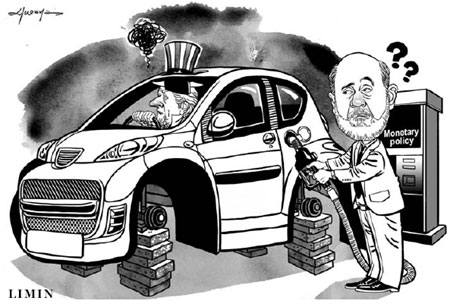 Shortly before Christmas, outgoing Federal Reserve Chairman Ben Bernanke delivered his plan regarding interest rates: to phase out crisis policies. To that end, the U.S. Federal Reserve plans to run its money printing presses a little slower from month to month. However, even with the step, its monetary policy is nowhere near returning to normal. The Fed’s balance sheet continues to blow up because the central bank keeps hoarding American securities. In addition to that, the zero interest rate policy remains unchanged.

Bernanke’s designated successor, Janet Yellen, must slip into the same straitjacket that the outgoing Federal Reserve chairman put on when he inherited the post in 2006 from Alan Greenspan, who was the high priest of American monetary policy at the time. Greenspan sewed the straitjacket for his successor; Bernanke never took it off.

The flood of money with which central banks, led by the American one, have battled crises since 1987 continues not only to generate new economic bubbles. The flood also ensures dependencies: the players have become downright addicted. The high priests of monetary policy became dealers a long time ago; as such, monetary stability, their actual job, has not been a concern for quite some time.