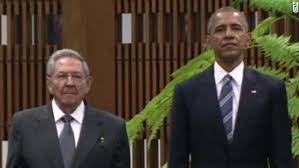 Without genuflecting, because neither my grandparents nor my parents ever made me bow my head, I thank Obama for visiting my island. The trail he has left behind in his brief time here has great value; it could shift the best of our combined thinking back into the foreground. It has the opportunity to vindicate what the Cuban poet Eliseo Diego called “the human city, the Homeland.”

These 48 hours have taken on the flavor of centuries as we have seen Cuba from the inside in all its light and shadow. With great pride, we have transformed historical memory although — and the visitor will have to excuse me — Obama asked us in his speech at the Great Theater of Havana of Alicia Alonso that we forget and leave the past behind and look toward the future.

As if we Cubans were able to live without memory, as if one were able to have hopes without remembering what we have lived through, suffered and dreamed.

I can understand that there is not enough time to explain to the president of the United States all of the pain we have felt like a burning spear since we chose dignity as a nation. This explains why some talk of the reconciliation as if the two parties, the tiny archipelago and the great land mass to the north, have only been enduring “family misunderstandings” and should walk the same distance toward a common understanding. It is what it is.

I don’t want to be a killjoy, but for as long as I can remember, I have been listening to and living with my friends and family who have never wanted to be the first to renew hostilities. I don’t want to be bitter now, but in 1981, when I was only a girl, I cried with panic while other innocent infants died of dengue fever, victims of one of the toughest wars that someone could have suffered.

I cried and also suffered when murderous hands, fueled by those living in Miami and financed by the CIA, set fire to a nursery with children inside. I was terrified by the idea that one day we would be bombed at dawn like Vietnam, Iraq or Yugoslavia, just for being honorable.

And what does Obama want now? He wants us to forget how successive governments impeded us — with a fierce blockade — from buying food, medicine and other goods in order to build us up and shape what he decries today as a “poor and suffering people.”

What is he asking of us? He wants us to move past how we were able to survive such an irrational crime, when for the past two years Cuba has been the victim of a cruel financial war? The endless persecution was of such an extent that it sowed terror in the global financial system, even among America’s most faithful allies, by imposing multimillion dollar fines for violating the embargo.

The doctrine which Obama sublimely preaches taught us to be more free. And forced us to ask more questions: How can we show the world and ourselves, to the fullest extent, the potential to be entrepreneurial if we live in a country that is strangled by the neck? Who is to blame for the fact that so many have been thrown into the sea and have crossed borders in search of the prosperity that has been denied to us?

I don’t want to overstep my bounds, and I admit that I don’t harbor any resentment toward anyone, but as Alejo Carpentier wrote in “The Rite of Spring,” where a character warns another that the Cubans are always on the verge of revolution, it is a fate that has haunted us like a gypsy curse from the founding days of 1959.

I should thank the American president from the heart because he made me remember our most profound and radical Jose Marti who knew the two neighboring countries very well, and from whose words I read that while those in the North bought, those in the South cried.

I think that the two peoples can move closer but without losing sight of the fact that we are dealing with two distinct cultures and very different ways of life, where mutual understanding will only be possible if humility and good intentions intercede.

Thanks to Obama and his reflections about how he became president despite his origins and the color of his skin, I remembered that as our various thinkers have vigorously explained, in his country, to get where you need to, you need a lot of money because freedom in his society is based on “having.”

And thanks also to him, it is also possible to make a fortune out the estrangement toward us and from the rediscovery that we are serious, which does not mean solemn, per se. Serious and profound despite our sense of humor and permanent smile; we can easily point out that when others see a theatrical backdrop in every landscape, the possibility of a reality show, it is like weaving a house of cards, a wall of symbols, that may vanish with the first solid argument.

I give thanks to Obama. I am happy he has felt very welcome in my country. I give thanks because he has reassured me that beyond the flavors, cobbled streets, beautiful corners, and food that invokes precious past experiences, we are a profound universe that only we can help figure out and defend.