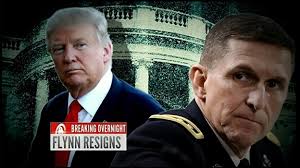 Political analyst Viktor Olevich on the consequences of the resignation of the U.S. president’s national security advisor.

The resignation of the U.S. president’s national security advisor General Michael Flynn less than a month after Donald Trump’s inauguration is the new president and his administration’s first serious concession in the standoff with various players in the country’s political establishment. Many have regarded the departure of a key member of the new administration’s heads of security as Trump’s weakness in the face of mass pressure from those who are not interested in reforming the direction of America’s foreign policy.

Despite assertions by liberal American mass media sources and insinuations by anonymous sources in the American intelligence community, General Michael Flynn was not a Russophile and did not take pro-Russian stances on any aspects of the bilateral relations between Moscow and Washington. Moreover, in an interview with U.S. press, Flynn spoke out about Russia and its leadership in less-than-flattering and harsh tones.

However, as an experienced military intelligence operative and former director of the U.S. Defense Intelligence Agency, Michael Flynn understood that the harsh confrontational approach adopted by Barack Obama’s administration toward Russia produced the opposite of the desired results. Despite Obama’s affirmations, the sectoral sanctions introduced by the United States and its allies didn’t “tear apart” the Russian economy, destabilize the Russian political region, halt the process of re-arming the Russian army, and force Russia to return Crimea to Ukraine.

Just the opposite, a Russia united by foreign attempts to isolate it managed to, using the sanctions regime and in a relatively short period of time, strengthen its ties with eastern partners for the benefit of the domestic agricultural sector and conduct a successful military operation in Syria which fundamentally changed the balance of power in the region: The threat of president Bashar al-Assad being overthrown receded and the armed terrorist groups supplied by the West experienced irretrievable losses.

The now-former head of the NSA also recognized that it was disadvantageous for Washington to, under present conditions, remain actively and simultaneously engaged in geopolitical conflict with Russia, North Korea, Iran and other international players and could bring the latter even closer together. Representing U.S. national interests, Flynn supported de-escalating relations with Moscow and returning to an active negotiation process between the two powers instead of the ultimatums issued by the previous U.S. administration. He saw possibilities for a fruitful collaboration with Russia in the fight against Islamic terrorist groups in the Middle East. At the same time, the retired general pursued the goal of driving a wedge between Moscow and Tehran and tearing Russia away from its strategic partners and allies. The latter would have weakened the United States’ main geopolitical rivals and clashed with Moscow’s interests, but Donald Trump’s administration’s attempts to build relations with Russia on the basis of new conditions would have opened the possibility for a reprieve and a subsequent slowdown of unacceptable American demands while focusing on strengthening cooperation in mutually-beneficial areas overall.

Donald Trump’s leniency in deciding a key personnel issue will intensify pressure on the new administration, continue the active sabotage of its activity by American intelligence forces and expand ungrounded accusations against the new president and his closest allies. General Michael Flynn’s communication with the Russian ambassador in Washington, Sergey Kislyak will, in the near future, become the subject of hearings in the relevant committees of the U.S. Congress. The minimum challenge of the broad anti-Trump coalition is to induce the new president and his administration to follow domestic and foreign policy that is habitual and convenient for the U.S. establishment, and its maximum challenge, in the event of disobedience, is to have the president eventually impeached or induce him to resign voluntarily.

The author is an analyst at the Actual Politics Center.