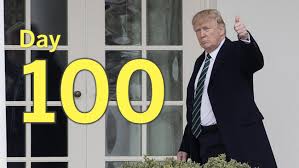 The president of the United States, Donald Trump, has reached 100 days as head of the most powerful government in the world. Although it is not a very representative period, it still allows us to draw some conclusions about the route his presidency is taking. In this sense, Trump’s decision to keep the trade agreement with Mexico and Canada is a good example of something that has been confirmed these first few months in the White House: that campaigning and governing are very different things, especially for Trump. The so-called “realpolitik” has been imposed and the president has been able to adapt and reverse some promises that would have caused more harm than good to the Americans themselves. Other examples of how reality has been made crystal clear are certain plans, such as the change of tone with China, and the aerial intervention in Syria and Afghanistan – situations in which the then-candidate swore that he would not intervene. Furthermore, despite the apocalyptic forecasts, the U.S. economy has not sunk: Between January and February, almost a half million jobs were created and unemployment stood at 4.7 percent. The wall on Mexico’s border has not been completed, and former President Obama’s health care law is far from gone. These have been 100 days in which Candidate Trump has had no choice but to give in to President Trump – a metamorphosis that does not seem to displease voters; 96 percent admit that they would vote for him again.