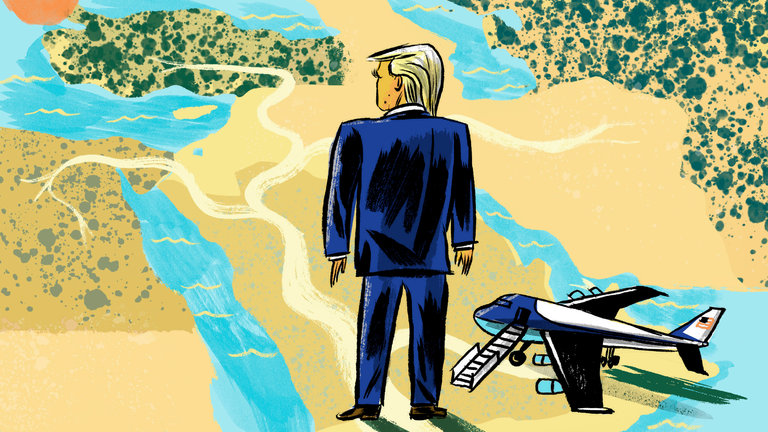 The destination of President Trump’s first foreign trip after his inauguration was the Middle East. In Saudi Arabia, he called for unity in clearing out radical Muslims and for strengthening pressure on Iran, and in Israel, showed a desire to implement Middle Eastern peace.

Throughout the presidential campaign, President Trump repeatedly spoke of Islam as the enemy. After his inauguration, he decided to restrict entry into the U.S. from countries in the Middle East and Africa that contained a large number of Muslims, inviting opposition from inside and outside the country.

Mecca, Islam’s sacred place, is located in Saudi Arabia. He may have chosen Saudi Arabia as his first destination as an appeal for reconciliation with the Muslim world. Before the heads of Islamic countries in Saudi Arabia, President Trump proposed a new security framework for dealing with Islamic extremists. The participation of Islamic countries in the fight against spreading radical Islamic terror is essential. Value can be seen in this point of view. However, there is also a problem.

President Trump emphasized isolating Iran and blocking terrorist funds. Those who were invited to the president’s speech were countries where the Sunni division of Islam represent the majority. If the goal of the security measures is to ally with the Sunni sect against Iran’s Shia sect, then that may agitate the sectarian divisions in the Muslim world.

President Trump met with both Benjamin Netanyahu, Israel’s prime minister, and Mahmoud Abbas, president of self-governing Palestine, and expressed a desire to mediate for peace in the Middle East. The Palestine problem is at the core of the unstable state of the Middle East. While struggling to mediate, successive presidents of the United States have faced repeated setbacks. I would like to be hopeful about the president’s enthusiasm.

However, this visit did not indicate any concrete plans or instruction for peace. Trump is considered to be on Israel’s side. He also gives the impression that he does not mind the current peace arrangements whereby the independent state of Palestine coexists with Israel. What is important is the viewpoint of an impartial mediator. I would like to see a proper effort made in support of this.