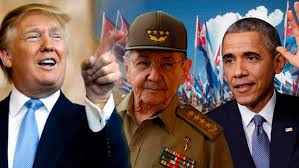 The scene had a certain retro feel to it. In Miami, surrounded by hardcore anti-Castro sentiment, Trump fit in perfectly. In another era, this would have been the heart of Florida’s power elite, if not for the ideological diversity that now exists within the Cuban community − largely due to generational change − and their unpredictable behavior come election time. Bear in mind that Florida is now a swing state.

Trump’s words were tough, and he said them with his usual bent for confrontation. He showed almost as much animosity toward Obama as he did toward the Castros and communism. Trump always makes it clear that his priority is to undo his predecessor’s legacy. Whether or not this actually happens is irrelevant; he will always say that he is the anti-Obama.

In reality, Trump’s plan for Cuba preserves much of the situation he inherited. Diplomatic relations will remain intact, with embassies in both capital cities, and some Cuban goods will still be allowed into the United States, despite the ratification of the embargo.

However, there will also be changes, including the promotion of widespread internet access on the island and a more rigorous enforcement of tourism restrictions, which exist on paper but often not in practice. Even more meaningfully, Trump has banned Americans from doing business with Cuban companies owned by the military and intelligence apparatus. This is because the economic opening up of the country has directly and indirectly benefited the party bureaucracy, while the people’s hardships have remained.

What’s happened is that a model of “capitalism for the elites” has been established on the island. For the American elite, this has been accomplished through tourism and golf courses; for the Cuban elite, by turning the ruling class into a foreign investment partner. Wealth is not distributed; it belongs entirely to those who are also running the state. And then there’s nepotism, typical of a family who’s been in power for six decades.

It’s not an original model. This is what many of the post-communist transitions have been like in Europe and Asia. With economic power in its hands, the regime obtains the resources to keep its political power intact. Wherever this kind of transition takes place, democracy has been sacrificed as a result. As in China and Vietnam, single-party capitalism is the goal of the Castro oligarchy.

Trump changed the script and did so explicitly: Cuba must free the political prisoners, respect freedom of speech and freedom of assembly, legalize all political parties and hold free elections with international observers present. People are already saying how ironic it is that Trump, ally of Saudi Arabia and admirer of Putin, should be the one to call for human rights in Cuba.

But looking beyond such contradictions, which are the foundation of politics, Trump has been effective in demonstrating the shortsightedness of the Obama administration’s bad deal, which gave a lot in exchange for nothing. And Trump isn’t the first to point that out. It’s a proven fact that Cubans haven’t been enjoying greater freedom since the re-establishment of diplomatic relations with the United States.

In fact, they have less freedom. Following the thaw in relations with the United States, Cuba has become a theme park where Lagerfeld walks the runway, Mick Jagger sings and Madonna dances on top of a table: Disney-Cuba, as has been aptly observed. Wasn’t that the big criticism of Fulgencio Batista? Now more repression is needed to keep the dissidents out of the view of international celebrities.

It inconveniences progressives for Trump to be right, but they should know that bending to another country in this way is never advisable. Especially not when it necessitates closing one’s eyes to reality, be it in Cuba or in Venezuela. For Trump also sent a message to Venezuela, which has been reduced to a kind of protectorate with a constitutional system made in the image of the Cuban Communist Party.

It’s been clear ever since the onset of Hugo Chávez’ illness that Nicolás Maduro, the current president of Venezuela, would be a simple pawn of the Castros. Clear to anyone who’s not as shortsighted as Obama, of course.