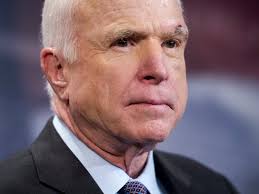 Mike Pence did what was expected of him as vice president of the United States: He broke the 50-50 vote deadlock, allowing debate to begin on the either total or partial repeal of Obamacare, the healthcare coverage expansion, which serves as a major legacy of Barack Obama’s presidency to Americans. Above all, though, the person Donald Trump should really be thanking for his political victory is John McCain, a Republican senator that, in spite of having been diagnosed with brain cancer, made it a point to turn up and make sure 50 votes were cast, following the desertion of two of his own party’s senators, precluding the possibility of an embarrassing defeat for the president’s camp.

As they say, McCain’s the man. A military pilot, he was captured and then tortured during the Vietnam War. He later made a political career for himself in the Republican Party, becoming the one in the Senate to speak not only on behalf of Arizona but also for the party’s moderate wing. As a presidential candidate in 2008, he lost to Obama, but he didn’t let that stop him from continuing his struggle to build bridges with the Democratic Party, a tradition which growing radicalism on both sides of the aisle—but most especially among Republicans—has made disappear, to the great detriment of America. A critic of the now-president even when Trump was still disputing the Republican candidacy, McCain was attacked by Trump, who even called McCain’s heroism into question. Nevertheless, once again, McCain admirably stayed loyal to the Republicans in 2016 and, as far as possible, to Trump, all in the name of the party.

McCain made it a point to vote to begin debate; however, he’s already announced that he won’t support the plan to reform Obamacare proposed by the House of Representatives. He says it’s his hope that, with an issue as sensitive as healthcare, it would be possible for Republicans and Democrats to come to an agreement together, to defend the poorest, the 22 million people who would lose their healthcare coverage.

Applauded by his colleagues and by Trump for his courage, maybe he’s finally got a chance of being heard. He undoubtedly deserves that consideration.