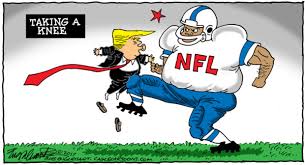 During the election campaign and throughout his months as president of the United States, Donald Trump has launched attacks on Congress, the high courts, Democrats, Republicans, the media, the Army, NATO, the United Nations and even against some of the most admired figures in the film industry. He has also fired shots at members of his own administration, against allied countries and against countries he considers potential enemies. He has not lost any opportunity to fall out with some nations, caused by his excessive egotism and his pugnacious character. No other U.S. president can be remembered who has tried so hard — and in so many ways — to divide his country instead of uniting it, as is expected of him. There are statistics about this: Sixty six percent of Americans think that Trump has done more to divide the country than to unite it. None of his predecessors exceeded 55 percent.

It is no surprise, therefore, that Trump has now directed his shots at the American football and basketball leagues, probably the two most popular sporting events in the United States. Last weekend, in speeches and on social media, Trump began to protest against sports figures who, in his opinion, disrespected the national anthem. First, against Colin Kaepernick, a former quarterback for the San Francisco 49ers, currently without a team — months after he began kneeling when the anthem played before the start of the game. By kneeling, Kaepernick was expressing his condemnation of repeated police brutality against black protesters.

Other African-American players imitated Kaepernick’s behavior, but the controversy did not erupt until the president insulted Kaepernick this weekend. Trump urged National Football League fans to boycott football games, and called on the owners of the teams to dismiss or suspend players who displayed disrespect for the national anthem. Later, the flames of this fire spread to the players and owners of white teams, and extended from the football stadiums to the basketball courts. The crisis deepened. When Trump tweeted that he was withdrawing his invitation for Stephen Curry of the Golden State Warriors to visit the White House, LeBron James replied, “Going to White House was a great honor until you showed up.”

Although football and basketball audiences, a part of the voting public, agree with the views of their president, this attack is turning against him. One of the team owners, a benefactor of Trump’s campaign, has responded wisely that, “there is nothing more unifying than sport and nothing as divisive as politics: our leaders could learn much from the importance of teamwork toward a common goal.”

He is absolutely right. What began as a social assertion by one player and an outburst from the president has already become a movement for racial equality and freedom of expression. Trump says his attitude is not racist in the slightest, but few believe him. There are many who once again point out that someone who is systematically quarrelling with so many fellow citizens is an unsuitable person to lead the country.