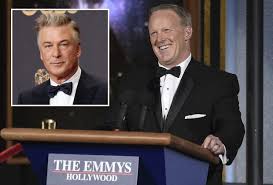 And they all laugh at Sean Spicer. The appearance of Donald Trump’s former press secretary erased any political credibility from the Emmy Awards.

If Hollywood wants to prove that something is not staged, it airs the surprised faces of the audience. When Sean Spicer, Donald Trump’s former press secretary, suddenly came riding onto the stage of the Emmy Awards, the cameras zoomed to a chorus of “Oh, my God,” the raised eyebrows of Kevin Spacey and the stunned expression of Melissa McCarthy. The comedienne’s parody of Spicer on “Saturday Night Live” during his short term in office was highly successful. As a monstrous puppet version of Trump’s spokesman, she berated the Washington press, stuffed her mouth with chewing gum and used a motorized podium as a battering ram against the journalists.

The real Spicer now rolled onto the stage of the Microsoft Theater in Los Angeles with that podium, but the sign on it read “The Emmys – Hollywood” instead of “The White House – Washington.” A parody of the parody, how nice! One of the most hated representatives of the Trump administration genuflected to the comedy industry. What a triumph. Or was it?

“At long last, Mr. President, Here Is Your Emmy.”

Spicer’s appearance at the most important television awards ceremony first and foremost shows how intertwined political Washington and the entertainment industry have become. The biggest TV star of the past year was Trump, host and late-night host Stephen Colbert admitted right at the beginning of the gala. “Every show has been influenced by Trump in some way,” Colbert said. And when Alec Baldwin accepted his Emmy for “Best Supporting Actor in a Comedy Series” for his Trump parodies, he dedicated it to the man who he had to thank for this award: “I suppose I should say, ‘At long last Mr. President, here is your Emmy.’”

Naturally, one can see this connection between the parodists and parodies as positive; perhaps American television has never been better than today, as Colbert asserted in his opening monologue. In the course of the U.S. election campaign and the 10 months of the Trump administration, the political relevance of late-night hosts has been particularly unprecedented. Some have even gone so far as to say that the late-night shows are almost solely responsible for the political education of Americans.

Of course, comedians are pleased about this role and one can hardly blame them for enjoying the fact they were heaped with the most important awards of the television industry on this evening: “Saturday Night Live” alone won nine awards; a further award was given to the show “Last Week Tonight” with John Oliver.

But satirists should be wary when they are celebrated too much. After almost a year of Trump, it appears that the liberal entertainment sector has become too comfortably established in its role as the opposition. When could one ever be so certain of being on the right side in the U.S.? When were distinctions ever as obsolete as in times when the opponent doesn’t bother with arguments?

Here it appears almost logical that for self-affirmation, one fetches the object of one’s derision on stage as comic relief. However, how credible can a self-designated liberal anti-establishment be if one’s declared enemy (just to be on the safe side, only a former member of the government) is accepted into one’s midst? It’s a little like back in September 2016, when Jimmy Fallon tousled the hair of then presidential candidate Trump on his “Tonight Show.” At the time, Fallon made an idiot of Trump, yet he also faced justified criticism.

And if Trump’s former press secretary is now permitted to joke before an audience of millions, “This will be the largest audience to witness an Emmys, period,” (an allusion to his first press conference in which he asserted “This was the largest audience to ever witness an inauguration, period.”) then the emcees were explaining away Spicer’s lies at the time as, yes, a joke. All of the debate about alternative facts and fake news are forgotten in the moment of exalting television. Spicer could chalk up the whole event as an image session for himself – a gift. The joke was simply too good.

At the beginning of the Trump administration, many people were relieved that the demonized billionaire and parts of his entourage were discredited because they could be parodied. It is a nice illusion that one can fight the entertainer Trump with weapons of entertainment. But racism, misogyny and stupidity cannot be laughed off so easily. This Emmy event would have been better served with less silliness and vanity, and more substantial rigor.