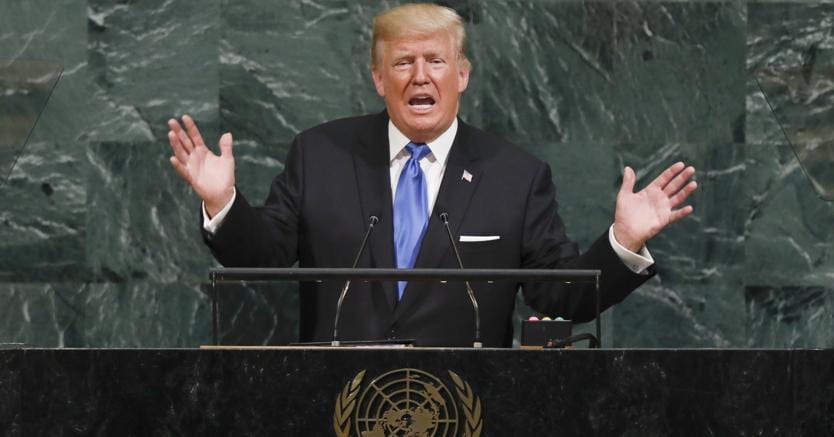 “If [America] is forced to defend itself or its allies, we will have no choice but to totally destroy North Korea,” said Donald Trump at the U.N. General Assembly. North Korea threatens the world: “It is an outrage,” he added, that there are nations willing to support Pyongyang. The U.S. president went on to label the nuclear deal with Iran “an embarrassment.”

Trump was right in his speech at the U.N.: The nuclear deal between the U.S. and Iran is indeed embarrassing, though not for the reasons he thinks. It is embarrassing because Iran, along with Russia and Bashar Assad, has defeated the Islamic State, and had it not been for the Iranian pasdarans* and the Shia militias, the caliphate would have laid siege to Baghdad. If we had waited for America to act, how many jihadis would have made it to Europe and blown themselves up with kamikaze belts?

The truth is that the war in Syria was lost by the U.S. allies, ranging from NATO member Turkey to Saudi Arabia and the Gulf monarchies. In 2011, the Americans sent Ambassador Robert Ford to take a stroll among the rebels of Hama. Today, the U.S. appears to be urging an attack on Iran, while knowing all too well that actually implementing it is far more difficult.

The more Trump speaks, the less convincing he becomes. He is not doing justice to the American superpower, which still aspires to remain the guardian of world order. That is especially true now that the North Korean threat appears to be well-founded. After having reacted to several provocations, Trump is now unable to find a way out. He has said that if North Korea attacks, there will be no choice but to destroy it. It is clear that any state that feels under threat will rush to procure a nuclear bomb, to deter attacks. He also added that it is an “outrage” that some countries support Pyongyang’s regime.

If he was referring to China, which actually voted in favor of the U.N. sanctions, it was the wrong move. Without China, or Russia for that matter, it will be complicated to defuse this psychological war, which risks degenerating – with devastating consequences for South Korea and Japan.

Trump’s manner of speaking is reminiscent of George W. Bush., but in another time and context. Unlike in the past, Trump shows an intent to disregard the disastrous American results after the invasion of Iraq in 2003, not to mention, on our end, Libya in 2011.

Trump went to the U.N. to deliver lectures that will anger the part of the international community that is not on the West’s side. He has reprimanded Venezuela and Cuba, countries that are very much lacking in democracy. Still, with the negative track record of American interventions, what solution does the U.S. offer?

Despite this, we have to put up with Trump, as nothing can be achieved without America. In doing so, we take the risk that we may follow him into some new inconclusive military adventure. Just think about the war on terror that started after Sept. 11, 2001. It has been 16 years since then, and our world has not become safer by any measure. We may not like an autocrat like Putin, we may even detest the Islamic Republic of Iran, but what alternatives has America provided? Trump’s USA has built up a bureaucracy and concrete barriers that keep it safe, not Europe.

Once the discussion about Trump’s speech moves from the U.N. to NATO, things will change and become more nuanced in order to formulate some new line of conduct that will not considerably raise our defense budgets, despite what Washington has been requesting for a long time. We Europeans also cut corners. However, this is a dangerous illusion. When faced with North Korea’s threats, we needed a speech that would have united the international community instead of dividing it even further.

*Editor’s note: Pasdaran is the informal name for the Islamic Revolutionary Guards Corps.