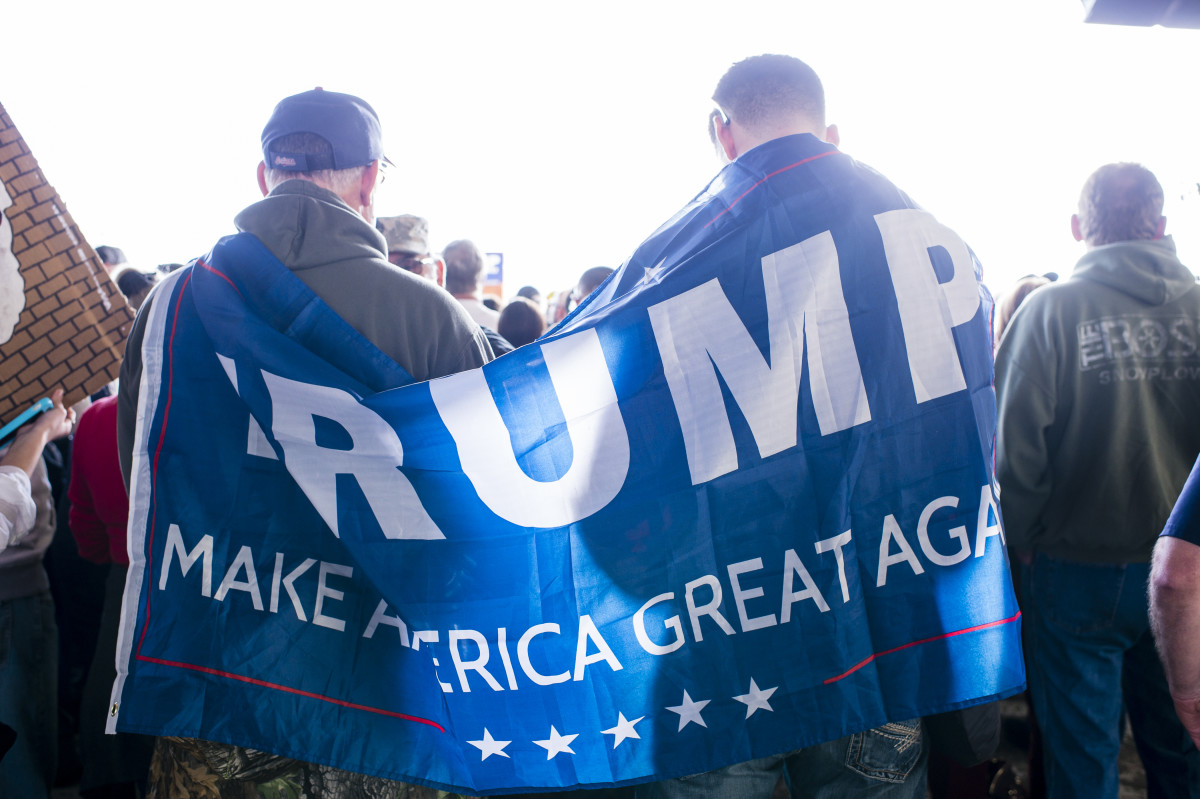 Donald Trump is not the problem, but rather symptomatic of an unjust world order; the left was too late in finding its own answer to globalization.

Just about a year ago, I sat on the bleachers in a gym in New Hampshire, a gym filled with anger, cowboy hats and a will to reclaim the country which, as was the unifying sentiment there, had been taken from them. Taken by the left, the gays, the Jews, the Mexicans, the Muslims, the blacks, the Chinese, by whomever.

“Lock her up, lock her up,” the people shouted, thousands of them, pale-faced, bearded, stout, slender, families, with stars and stripe flags around their shoulders, and who were referring to Hillary Clinton, Donald Trump’s opponent. They had travelled here for him, they wanted him to be president, he would fight for their right to be white and angry.

It was crude, it was a cliché, it was hard to believe that it could happen. But it did happen and right up until today, the attempt to understand it has been almost painful: Why was it so difficult to see it coming? In any case, for many, it was a fatal flaw, and so the tragic tale began.

If we had seen earlier that an insurgence against globalization was gearing up, tied up with a brand of racism that had been pent up since the American Civil War and which was nurtured by the manipulative power of a few fat cats and augmented by the use of technology, then we might have been better equipped to stop Trump back then – and might better understand him today.

But this circumstance is part of the problem; just like air, the establishment which Trump attacked had, over the years, become so ubiquitous and so inescapable, it became invisible – globalization in its seemingly singular guise and with seemingly iron laws. That was the way of the world, that was the historical necessity, that was Hegel on speed.

“Duck and cover,” – this piece of advice from the nuclear age, find a wobbly wooden table and hide yourself underneath it – was more or less all that politicians from almost every party had to offer. That was and still is a particularly bitter pill to take if you look at the current intellectual, and consequently, political failure of social democracy.

One year after the startling and fateful election in the United States, there are quite a few questions, above all because Trump is not so unique and not a comet that hurtled into us from outer space, but is rather the product of a very real course of events and social dislocations – and if we want to solve these problems, we need to see Trump as a symptom and not the problem himself.

On the one hand, there is perhaps the most important question of globalization, against which there were countless protests from Seattle in 2001 to “Occupy Wall Street” in 2011 and beyond, all of which were ignored both in the media and by politics, or were scoffed at by the very people who woke up after Trump’s election and rubbed their eyes in wonder, asking: Ah, everything is not so good after all?

Hence, the days when we could approach the question of harmonizing free trade and wealth and national statehood with democracy in a rational manner are over, at least for now. Discussions about the just and fair world economic order will now take place against the backdrop of this nationalistic, identity-driven and anti-democratic insurgence.

The Lack of Discussion About Globalization

There were and are enough critical and constructive approaches to imagine world trade differently, but they were just ignored or systematically suppressed. Like the Indian author and historian, Pankaj Mishra, you can talk about the “propaganda” of those who automate globalization and globalization’s fanatics; this is an alternative voice from the outside, outside of the West and outside of the economists.

Or, like the American-Turkish economist, Dani Rodrik, who has been working on alternative models of globalization in the plural, you can describe how those in his line of work have rejected facing reality en masse and recognized that globalization in the singular brings with it an array of avoidable downsides if it is described and pursued either as a doctrine of salvation or alternatively a force of nature.

Rodrik, who teaches at Harvard, is a voice from inside the system, and as such, his portrayal of his industry’s blindness is more serious, for instance, his portrayal of this in his newly released book, “Straight Talk on Trade.” In the book, he describes the lack of discussion about globalization as a mental delusion on a global and epochal scale, a declaration of intellectual bankruptcy for great swathes of implicated economists.

A Way of Thinking which the Left Abandoned

According to Rodrik, everyone played a part in the defeat of Hillary Clinton, and the general woefulness of Social Democrats in Europe is in some way connected with this error or betrayal – their not having developed a counterposition to globalization, but rather, like Sigmar Gabriel for the Social Democrats in Germany, having defended and expedited secret negotiations on free trade agreements.

It was a mistake, and not a recent one by the Social Democrats, to give up that field of politics and surrender themselves to the rationality of the economy and finance, an historic error, which led more or less directly to Brexit and Trump.

The origins of this political failure in the past few years, for which the Social Democrats have not been rightly punished, are to be found in the 90s, when talk of the “New Middle” and a “Third Way” established a way of thinking that forfeited traditional leftist positions – and in doing so, also forfeited a large part of the working class milieu, a group which over time has moved quite strongly to the right where it found its interests better represented.

What is quite sweepingly called the failure of the elite is actually the failure of a very specific group in society. The American publicist Thomas Frank, for instance, described this very well before Trump’s election in his book ,”Listen, Liberal!” – a departure by the left, and not just the American left, from politics based on economic questions to culture, status and cosmopolitanism.

All of this was largely lost in coverage of Trump by the media such as CBS or CNN, which profited somewhat shamelessly from the parties’ advertising excesses and, to a certain extent, made Trump president themselves. They were far too interested in emails and other spectacles than in asking questions about anything of substance, even with Hillary Clinton. They simply could not imagine that Trump would be elected because they no longer understood the world they helped to create. The problem was that many journalists could not even read Trump, did not want to read him and allowed themselves to be distracted from everything which they found so sickening: the wall, the racism and the misogyny.

At its heart, it is always about injustice – that is what currently links all Western democracies. And the drama of Trump’s election was that the convincing answers to this question about injustice did not come from Clinton, who was, to a greater extent, a part of a system, a system which was completely focused on its own self-preservation.

Even Martin Schulz, leader of the German Social Democratic Party, as my colleague, Markus Feldenkirchen’s portrait of him showed, suffered from this left-wing lameness – as great as it was sad – a self-made illness, hopefully to be remedied through the shock of the current situation. For the German SPD it is now about finding answers to the questions which Trump has raised, as hard as this may be to accept.

What is left-wing politics under the conditions of globalization? What is democracy in the era of digitalization? What is fairness in a world without employment? And why is nobody talking about the greatest challenge of our time, climate change?

Trump exists in many like a virus in the system which has made itself weak through its own mistakes, mistakes which, under currently fragile conditions, are harder to remedy than before. If the system survives, the hope is that it will be stronger and better than it was beforehand.