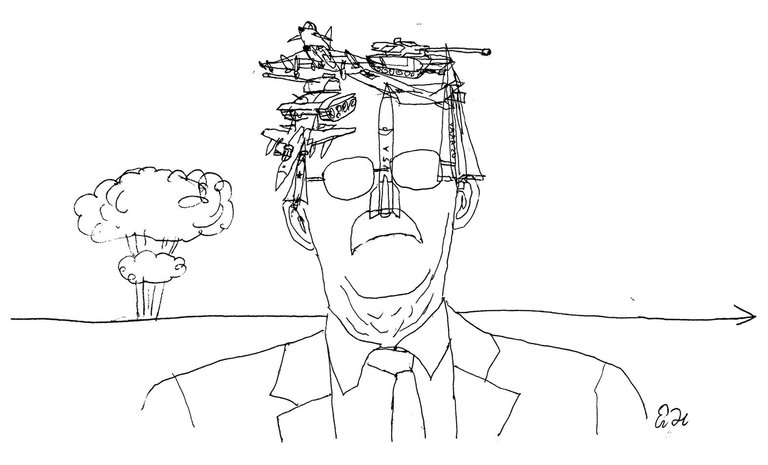 The U.S. president took to Twitter to announce the dismissal of his national security advisor, H.R. McMaster, and McMaster’s replacement with this supporter of a tough and bellicose line of diplomacy.

Nine days after firing his chief diplomat, Donald Trump announced via Twitter on the evening of Thursday, March 22, that he was dismissing National Security Advisor H.R. McMaster, and replacing him with John Bolton.

While the occupant of the White House is not known for his taste in past records, he undoubtedly knows the positions of his new adviser very well. The former United States ambassador to the United Nations (who served briefly in that position) is a regular on the conservative Fox News channel and is regularly and publicly praised by the president.

By appointing Bolton, Trump knowingly adds a “hawk,” a staunch defender of preventive wars, to his team. Bolton’s extreme positions might have jeopardized a nomination to a position for which Senate confirmation was required. However, the national security advisor serves only at the pleasure of the president.

Militant Supporter of the 2003 Invasion of Iraq

Recently, the former diplomat has publicly expressed his desire for a show of strength regarding Iran and North Korea, although he has welcomed the proposed meeting between the president and his North Korean counterpart, Kim Jong Un.

After the replacement of the moderate secretary of state, Rex Tillerson, with the “hawk,” Mike Pompeo, at the State Department, Bolton’s return to power can only worry the European signatories of the Iran nuclear accord forged by Trump’s Democratic predecessor, Barack Obama. Only a few weeks from the May 12 deadline, the camp of those arguing for an exit from this compact has been bolstered by the Republican administration.*

The choice of Bolton may be surprising given the role played by this “hawk” in the U.S. invasion of Iraq in 2003. During the Republican presidential primary campaign, Trump did not mince words when describing Republican President George W. Bush’s Iraq initiative. “The single worst decision ever made,” he said, insisting that it represented $4 trillion spent for nothing.** “We have done a tremendous disservice not only to the Middle East, we’ve done a tremendous disservice to humanity,” Trump added, thus arousing suspicion of his isolationist tendencies. At the time, Bolton had actively advocated for the overthrow of the Iraqi dictator, Saddam Hussein, joining the neoconservative current that prevailed with Bush in power. Bolton may have regretted some of the decisions made following the regime’s collapse, but he never questioned the merits of an intervention supported by baseless accusations about weapons of mass destruction.

Such warmongering is a constant with Bolton. While attending the prestigious Yale University, this son of a modest, virulently anti-communist family did not demonstrate against the Vietnam War like most of his classmates, including Bill Clinton and Hillary Rodham. After becoming an attorney, he practiced in several firms while militating in the conservative ranks. He became close to the powerful North Carolina Republican Sen. Jesse Helms, who harbored nostalgia for racial segregation. Helms supported Bolton during the Ronald Reagan and George H.W. Bush administrations.

Bolton constantly defended a Republican hard line at the State Department and at the Justice Department. After Democrat Bill Clinton’s two terms, he returned to diplomacy following George W. Bush’s victory in 2000, again supported by Helms, who became chairman of the powerful Committee on Foreign Affairs. Bolton then became under secretary of state for arms control.

Under Bolton’s leadership, the United States defeated a United Nations convention banning chemical weapons, acting in the name of U.S. security interests. Bolton also advanced the argument of American sovereignty to justify Washington’s withdrawal from the International Criminal Court created in 2002. After his re-election in 2005, George W. Bush gave Bolton the post of United Nations ambassador despite hesitation in the Senate, taking advantage of a congressional recess to do so. Lacking a green light from the Senate, Bolton was forced to leave office after one year.

After the Democrats’ return to power following Barack Obama’s victory, Bolton retreated to one of his bases, the American Enterprise Institute, a conservative think tank, and unsuccessfully ran for the Republican presidential nomination in 2012 and 2016. On Fox News, he tirelessly criticized the White House’s diplomatic decisions and any concession to multilateralism. He warmly welcomed Brexit, this “dagger pointed at the heart of the EU,” as he put it. Bolton and Donald Trump hold so many shared positions that at one point, after Trump’s victory in November 2016, the idea of his appointment to the post of Secretary of State was floated as a possibility.

This third appointment to a strategic post in just over a year sets a new record for a particularly unstable administration in which there has been turnover in more than 40 percent of the key positions, according to Kathryn Dunn Tenpas, a governance expert at the Brookings Institution. The first person to hold the position, former Gen. Michael Flynn, who was rewarded for his early commitment to Trump during the presidential campaign, had to step down after just three weeks at the White House for having lied to the vice president about his conversations with the Russian ambassador then posted to Washington.

The choice of active general H.R. McMaster reassured moderates. However, McMaster did not know how to build a relationship of trust with the president. The long presentations he favored quickly annoyed Trump. Just like Secretary of State Tillerson, McMaster had to endure a public humiliation when the president tweeted criticism of part of a speech McMaster gave during a Munich conference on security in February. McMaster’s dismissal took place in the same manner as that of the former head of petroleum giant ExxonMobil: on Twitter.

*Editor’s note: According to the Iran nuclear deal, the president must periodically agree to waive the nuclear sanctions against Iran that remain effective under U.S. law. The next waiver deadline is May 12.

**Editor’s note: Although accurately translated, Trump’s remarks about an expenditure of $4 trillion could not be precisely verified. Trump was quoted by CNN as saying: “We’ve spent $4 trillion trying to topple various people that, frankly, if they were there and if we could have spent that $4 trillion in the United States to fix our roads, our bridges, and all of the other problems – our airports and all the other problems we have – we would have been a lot better off, I can tell you that right now.”