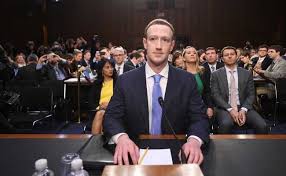 Perhaps the criterion of what is fake news should not be left in the hands of the social network.

One imagines Aaron Sorkin engineering the swift dialogue with which to lift the second part of “The Social Network,” which could well be captioned: “How Facebook Stopped Being Friendly.” Reality has provided Sorkin with a magnificent and cinematic scene: Mark Zuckerberg testifying before Congress, one of the most recognizable rituals in American democracy. As much as Zuckerberg tried to convey the idea of Facebook as an “idealistic and optimistic company” in his remarks before the members of Congress, the truth is that few see it that way, courtesy of its wolfish appetite for external data that, in truth, its users surrender to gladly.

But Zuckerberg did not go to Congress to talk about why, when one uses Google to find information about hotels in Paris, one’s phone displays Facebook contacts that have gone on holiday to the French city. Instead, he went to talk about how his social network is used to spread “fake news” and interfere in electoral processes. Zuckerberg apologized, which is already a lot. It is more than several American administrations have done in response to interfering in electoral processes in other countries, for instance. Excuse the demagogy? Or not.

A Line of Code

Facebook is no longer friendly, and neither are Google, Apple and, in general, every company that emerged from a garage or a line of code typed inside a college dorm. They are the establishment of our time, and the members of the former establishment (those who tried to influence elections or politics or business and commercial decisions through printed pages and in the minutes spent on television) feel a singular joy in striking the new establishment when they catch them with their hands in the cookie jar.

That is what Cambridge Analytica is, the cookie jar, the smoking gun, how Facebook helped Brexiters achieve their victory in the United Kingdom and helped Donald Trump move into the White House. If the blame lies with Facebook and the Russians, besides giving order to chaos and providing an explanation for the impossible, it also serves to calm us and help us find explanations: If Facebook behaves, bans fake news, controls malware and the Russian-originated software, things will be very different; instead of Trump, there will be another Clinton or someone similar.

Aside from the fact that it is equally hazardous both to underestimate and overestimate the ability of social networks (Twitter is also among them) to install and remove presidents and win or lose referenda (or call for consultations that are considered illegal), the debate should not forget the nipples. That means if we give Facebook the power to decide which news is fake and which is not, seeing how it behaves when deciding if a picture is pornography or not does not inspire much confidence in what its journalistic and democratic criteria will be. One thing is certain: The establishment (the current one, the former one, the ubiquitous one) would have no reason to be afraid. Perhaps we should start considering social networks not as an end in itself, but as a tool and, above all, as a mirror.