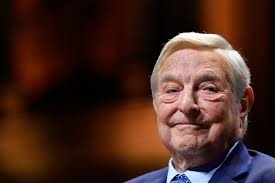 Donald Trump’s accusation that this man is always behind the scenes when someone speaks out almost resembles a witch hunt. One such example was last weekend’s protests at Capitol Hill over Brett Kavanaugh’s nomination to the Supreme Court. Rudy Giuliani, the president’s ultraloyal attorney, even called him the Antichrist. The man in question is George Soros, the 88-year-old American billionaire of Hungarian origin, known for being a political activist, a philanthropist, an investor with a legendary eye for a deal and one of the world’s leading traders. For some time now, he has also been playing the role of the nationalist bogeyman.

A few months ago, in February, he donated $18 billion to the Open Society Foundation, his foundation promoting “open societies.” That left him with a net fortune of ‘only’ $8 billion. Having survived the Nazi occupation of Hungary and having stepped away from his role as an investor through Soros Fund Management, in recent years he has dedicated himself full time to political activism. He is the leading financial backer of progressive movements and causes all over the world, what Steve Bannon – the original inspiration behind Trumpism – has termed the “Progressive International.” Between 1979 and 2011, Soros is estimated to have donated more than $11 billion to a huge range of social and civil initiatives to reduce poverty and help the most disadvantaged young people through grants for study and university. He has also supported initiatives of the progressive movement.

The ‘Globalist’ Who Believes in the Free Market

Bannon’s company, Breitbart News, which produces political documentaries laced with venom, has branded Soros a ‘globalist’ because he supports the free market and globalization, a view that has not altered over time. Soros, who often quotes Karl Popper and is a great admirer and scholar of the philosopher’s seminal text on the history of political doctrine, “The Open Society and Its Enemies,” decided to enter politics late in life after decades spent on the front line of finance and in philanthropic work for communities. He has become the living embodiment of all that the far-right dislikes and the punching bag for populist movements all over the world.

Soros’ aversion to nationalism and populism and his defense of cosmopolitanism, free markets and immigrants have their origins in what has been happening in Hungary, the country of his birth. In the post-communist era of Viktor Orban, national sovereignty is pursued at all costs and to the detriment of traditional relationships with supranational institutions such as the European Union, which he has been mistreating with growing regularity. It is a sentiment that is on the rise in Eastern Europe, Poland, Scandinavia and the Balkans. Bannon, the former inspiration behind Trump’s politics, is trying to mobilize this trans-European populist and nationalist movement against Soros’ philanthropic activities in support of refugees and their right to asylum. The movements are essentially two opposing worldviews. “Politics is war,” Bannon explained a few months ago in a radio interview. “This is a war for control … They fight, look at [George] Soros and these other NGOs… they destroy you.”

In short, the philanthropic financier has become the living embodiment of evil. In Bannon’ eyes, Soros is the polar opposite of nationalism (defined as a lethal mix of xenophobia, individualism elevated to institutional status, trade wars, protectionism and hostility to the international organizations founded after World War II that have maintained peace in the West). Soros has never forgotten the experience of surviving Nazism. He is fighting against the winds of the right that are buffeting both sides of the Atlantic. And that is why all nationalists hate him.