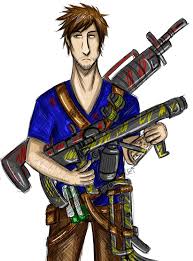 Columbine High School, April 1999: 15 dead. Virginia Tech, April 2007: 30 dead. Sandy Hook Elementary School, Dec. 2012: 28 dead. Parkland, Feb. 2018: 17 dead. The list is long; too long. Since 1966, nearly 250 mass shootings have taken place in the United States. The FBI defines such shootings as ones which cause at least four deaths, not including the killer’s, in a public place, outside of a family environment. These massacres, often perpetrated with semi-automatic weapons, have become “a reality which we could nearly class as everyday,” writes André Kasper in his latest essay.

The historian, who is the author of several studies on American society, delves deep into this reality from several angles. The principal among the numerous, astonishing facts is the question of gun control. It is the one that stuns the rest of the world and, following each tragedy, divides America. But also there are the ordinary, everyday deaths that attract less media attention. “On average, every day in the United States, seven children are killed by bullets. Gun violence is the leading cause of death among black children under the age of 19 and the second among all children in this age range,”* reveals journalist Gary Younge, author of “Another Day in the Death of America,” which Kaspi cites.

One Firearm Per Citizen

How do we explain all these deaths? For starters, the number of firearms in circulation, estimated to be between 265 million and 350 million, is the equivalent to one per citizen (U.S. population: 327 million in 2018). That would make the U.S. the leading country in terms of civilian gun ownership, after Yemen. That said, not all Americans carry guns. “Gun owners make up between 22 and 25% of the population. And 130 million of the guns will be in the hands of 3% of the population. So 7.7 million Americans own them, meaning each of them have between 8 and 140,” writes Kaspi. The book examines the world of these “super owners,” often found at the 3,000-5,000 gun fairs organized annually on American soil. “The show is worth the trip. […] You can come on your own or with your family. You walk around; have a look, size up the guns. You can drool over the technology. You forget, pretty much, that guns can kill.” Incidentally, guns are sold more or less freely at gun fairs, as sales to individuals are largely permitted.

But even in stores or through official vendors, controls in many states – such as Texas, Arizona and Florida – are minimal, and it is easy to get around them. This hugely benefits the American economy, as the firearm industry is based mainly in the U.S., with flagship brands being Colt, Smith & Wesson and Ruger. “One can name 65 firms which specialize in shotguns, in handguns or both,” writes Kaspi. “It’s a dynamic industry which is doing well and provides a lot of jobs.”

This is especially so because the calls for stricter controls, which reemerge after each mass shooting, paradoxically boost sales. “The industry benefited in 2013 and 2014 from the effect of the Sandy Hook shooting and from the 2016 presidential election campaign. In both cases, the calls for caution stimulated sales. Buyers feared that restrictive laws would prevent access to the arms market.”

Makers and sellers do not, however, have much reason to worry, because their lobby keeps a close eye on things. Its most public face, the National Rifle Association, has 6 million members. It has stores, a museum half an hour from Washington, and various champions, the most famous of which was actor Charlton Heston, who died in 2008. Their main argument, which they repeat after every tragedy, is, “The only way to stop a bad guy with a gun is with a good guy with a gun.”

For the NRA, limiting access to shotguns and handguns would be endangering honest citizens and even violating the Constitution. The Second Amendment, adopted in 1791, protects the right to “keep and bear arms.”** Kaspi states that it has been discussed numerous times, but the Supreme Court has never decided to repeal it.

And there are unlikely to be many chances to do so in the future, primarily because, despite the shootings, Americans are increasingly less in favor of controls. In 1959, 60% wanted to ban handguns, but in 2008, it was no more than 24%. What’s more, the anti-gun lobby, although it does exist, is weak, divided and unable to impose their viewpoint. And finally, the Second Amendment is unlikely to be repealed because the NRA benefits from unconditional support in the form of Donald Trump. “He never stopped throughout the election campaign to be clear in his support for the NRA’s beliefs. Since he entered the White House, he hasn’t renounced them once, quite the opposite,” Kaspi said. The president has only one solution to counteract school shootings: Arm teachers and staff.

Given these conditions, Kaspi harbors no illusions. “When the media reports dozens of deaths from a shooting, public opinion feels deep emotions, showing bottomless sympathy […] then immediately returns to its usual divisions, or even to indifference and resignation.” Until the next massacre …

“The Armed Nation. Guns at the Heart of American Culture,” by André Kaspi, Editions de l’Observatoire.”

**Editor’s note: The Second Amendment provides: “A well regulated Militia, being necessary to the security of a free State, the right of the people to keep and bear Arms, shall not be infringed.”