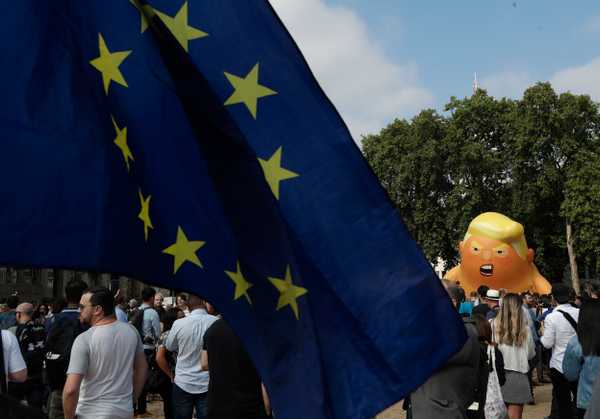 Donald Trump finally lands in the U.K. today, starting a three-day state visit by having tea with the queen. The U.S. president’s state visit has been delayed for some time, and there have been significant protests.

Just yesterday, London’s Social Democrat mayor, Sadiq Khan, sharply criticized Trump, pointing out certain of his recent political decisions as reasons why the British government should not roll out the red carpet and any of the attending honors. Among the decisions Khan mentioned were restricting women’s rights, separating children from their parents at the border with Mexico, introducing travel restrictions for citizens of Muslim countries, defending the far right and neo-Nazis in Charleston and withdrawal from Paris climate agreement.

Khan could have added the constant attempts to destroy the EU to this list.

Supporter of a Hard Brexit

Since Trump took office, he has raised the level of conflict with America’s traditional and closest European allies. He has constantly criticized NATO and its cooperation with the EU, and was quick to praise Brexit.

Ahead of today’s meeting, Trump has issued several controversial statements about British internal affairs. He declared that Boris Johnson, one of the biggest supporters of a hard Brexit, would “do a very good job” as Theresa May’s replacement.

Trump has also said that Britain should let EU critic Nigel Farage negotiate its Brexit agreement. If that doesn’t work, Trump has said the UK should leave the negotiating table and refuse to pay the ”divorce bill” to EU member countries.

Trump dreams of disrupting and splitting up the EU. While his old chief strategist Steve Bannon is doing the same thing in an effort to create a new fascist order in Europe, Trump’s main objective is trade.

The EU is the world’s largest economy and a greater exporter of weapons than the United States. The 28 member countries play a central role in global trade through its common market. Trump doesn’t like to have such strong opponents.

Instead, the president wants to sign trade agreements directly with countries to give the United States an advantage. The strategy is egocentric, and his view of the EU is frighteningly lacking in historical knowledge.

Like London’s Khan, more politicians should take the opportunity over the next few days to oppose Trump’s constant attacks on the EU project.