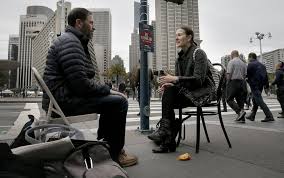 On a summer weekend, Traci Ruble and 20 others sat in empty chairs on a street corner in San Francisco to talk to strangers. Another man, Chuck McCarthy, has given interviews in LA about the success of his app, People Walker, which charges “walkers” between $7 and $21 to have the company of another person on a walk. In San Diego, 65-year-old Adam Paulman attends a hug party where some 30 people paid $20 to participate in non-sexual touch. These types of initiatives proliferate as health authorities in the United States alert that there is a “loneliness epidemic.” Loneliness, they say, is a condition that is more harmful to a person’s health than obesity, and just as harmful as smoking 15 cigarettes a day. The data backs up these claims. More than half of adults in the United States believe that nobody really knows them, and 46% acknowledge feeling lonely or left out, according to the latest survey conducted by Cigna and Ipsos.

Gender and ethnicity are not factors; rather, age is the primary determiner of loneliness. The so-called “centennial generation” (18- to 22-year-olds) – digital natives – are those who feel the most alone. An obvious conclusion is to place the blame on their hyper-connectivity, but according to the survey, there was no significant difference between those who use social networks regularly and those who use them less often. The factor that defines how lonely a person feels is related to the time they spend with others, face-to-face. Severe isolation can have mortal consequences, Julianne Holt-Lunstad, professor at Brigham Young University, said in a Senate testimony she gave in 2017. She warned that the problem is both psychological and structural.

For two years, CareMore Health has offered both to the elderly and to low-income people, plans – grouped in the Togetherness Program – that treat loneliness as a health condition that can be diagnosed, prevented, and treated. In practice, this means weekly phone calls, home visits, personal encouragement, and community programs.

As the best entrepreneurs say, where there is a problem, there is a business opportunity. Chuck McCarthy, who created People Walker in 2016, explains that his service, which provides walking buddies for a charge, is a response to companies that invest thousands of dollars “so that people feel alone in front of their screens. If someone is walking, they’re not on social networks, they’re not using streaming services, they’re not playing video games, and they’re not buying things online,” he says. All the service’s “walkers” go through an application process and background check. Also, there is a real-time locator during the user’s walking path.

A Tinder for Friends

Rent a Friend, founded in 2009 in the United States, has more than 600,000 “rental friends” in many areas of the world. Users, who pay between $10 and $50 per hour, must also follow protocol: meet in a public place, have a phone with them, tell a friend where they are going to be and what time they will return, among other rules. Entrepreneur Scott Rosenbaum was inspired by a Japanese app, in which people pay for a stranger to accompany them to a funeral or to a family dinner after a divorce. In the U.S., though, it works like a Tinder* for friends. Rosenbaum explains that users talk with various candidates, and when they feel comfortable with one, they hire them. Still a little faithful to the Japanese original’s useage, one of the options offered on the website is “family activities.” As opposed to hug parties, physical contact is prohibited in Rent a Friend. At hug parties, started 15 years ago, the goal is “to get to know one another and to bond,” says Adam Paulman, who has been both a participant and a host at these parties for the past five years.

For therapist Traci Ruble, the fact that there are so many initiatives to combat loneliness “shows how big the problem really is.” In 2015, she founded Sidewalk Talk. Along with some therapist friends, she sat in the street in front of empty chairs they had set out for anyone who might want to sit down and talk. It was such a success that it blossomed into an organization that now functions in more that 12 countries. Of the more than 4,000 volunteers who participate, a quarter of them learned about the program because they were “listened to” and now want to return the favor. The volunteers are trained with a basic knowledge of mental health crises and empathy. In its four years of existence, there have only been two negative episodes, says Ruble.

Ruble addresses the money factor in entrepreneurial solutions for the disease of loneliness. She says that she feels that judgment toward those who contract these services is inappropriate, but she also points out that when payment is part of the equation, “there is a power dynamic in play that doesn’t exist when things are free, when we are all on the same level.” For her, if these services are to be part of the solution to loneliness, it is necessary that their employees receive fair wages. “When you have three jobs to be able to just make ends meet, you’re exhausted and just don’t feel like getting together with anyone.”

And on another level, we have to create an infrastructure for people in need. This level of homelessness should not exist,” says Ruble, the therapist from San Francisco. In San Francisco, the number of homeless people has risen 17% in the past two years, rising to over 8,000. One out of every 100 people in the city lives without a house. There aren’t statistics about whether or not homeless people are lonely, but the answer is intuitive.

* Tinder is an online dating app.

Efforts have been unsuccessful to verify quotations by Chuck McCarthy and Traci Ruble.