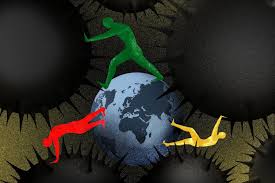 What will happen once the pandemic is over? In affluent, profit-driven societies will human beings not become, just as in the 2008 financial crisis, mere adjustment variables and minnows?

As the coronavirus pandemic is in full swing the world over, people are abuzz with speculation about what life will be like post-coronavirus. Some, like economist Daniel Cohen, imagine a deglobalized economy, while others, following in the footsteps of “collapsologists,” dream of an apocalypse (or “the great collapse”) after which we will be able to invent a better world. Others still see the emerging danger of security-obsessed, oppressive states which entrust risk management to machines. During a collective crisis, the imagination, stimulated by fear, is fertile and willingly devises scenarios of radical change. This human capacity to project ourselves into the unknown is a power as much as an illusion.

But what would happen if, once the pandemic has ended, nothing changed? What if the big political losers of the crisis, i.e., the likes of Donald Trump, Boris Johnson and Emmanuel Macron, who notoriously failed, were to become the winners of the post-crisis world? Bolstered by their ultimate triumph over the “war” against “the invisible enemy,” posing as national saviors, who is to say that they won’t be reelected? History is rife with these types of unexpected plot twists. And what if capitalism, which many leftist thinkers were declaring on its deathbed before the pandemic struck, when in reality it was healthier than ever, were to come out on top after the crisis, and its deadly viruses – the financialization of the economy, tax havens and exploding inequality – more powerful than ever? Didn’t the U.S. Federal Reserve just turn to BlackRock, the asset manager whose power and opacity makes every country in the world tremble, in a desperate plea for help? Is this not a pact with the devil, or at least the unprecedented interference of an ultra-powerful private company in a parastatal regulatory body that impacts the United States and the global economy?

It’s true that BlackRock, along with three other asset management firms, had already rushed to the aid of the Fed in 2008 to help it save the stock exchanges and financial markets. More broadly, the manner in which the 2020 crisis is being handled, although the factors causing it bear no relation to those behind the 2008 crash, is awfully reminiscent of the previous crisis, and may be worse still. This time around, countries didn’t pause before pulling out their checkbooks to “save the economy” (was it so fragile that it was immediately necessary to release hundreds of billions of euros or dollars to save it?). In a dizzying series of spectacular announcements in which countries kept outdoing one another – the top award goes to the United States and the EU, each announcing a rescue package of nearly $2 trillion – nations gave up on any form of financial orthodoxy and rules currently in force and tried to tame the wrath of the sacrosanct markets without answering three key questions: Where would they find all this money? Who will pay back the colossal sums of these record-breaking loans? What will be asked of the bailed-out banks and businesses in return? Just as in 2008, it seems like a huge blank check has been written out to companies, banks and insurers so that they can put their employees back to work as quickly as possible.

Because in an unbridled neoliberal economy, what this all comes down to is a choice between the stock market or life. Up until Sunday, March 29, Trump made it clear how impatient he was to see Americans go back to work the week after Easter, but they would be putting their lives on the line, with a full-fledged pandemic-induced health crisis settling in by that time.

Even Germany, very concerned over its industry grinding to a halt, insinuated by way of its finance and economic affairs ministers that it would be a good idea to relax quarantine measures for professions considered to be essential, which go far beyond just the health care sector. And the highly virtuous country of Sweden, a model of humanism, publicly weighed the pros and cons of emphasizing the health of the population over the health of the economy, of life over the stock market. In affluent, profit-driven societies, human beings become adjustment variables and minnows.

Truth be told, European nations are no longer in a place to give any lessons in morality to the United States or China. In France, the president of the republic, after ripping apart the public hospital system and remaining deaf to health care workers’ demands over the past year, decreed, in all seriousness, hospitals as the great national cause. The doctors and nurses who will have died fighting the virus will have him to thank. France and Germany showed the same disdain for their Italian neighbors by refusing to send the country respirator masks which would have helped save lives. Italy, Spain and France are each left to their sad fate and each to tally up their dead.

A Dreadful Feeling of Déjà-Vu

It’s as though, in the harsh light of the crisis, every European principle, whether the precautionary principle, the rule of solidarity between member states or the “Mutual Defense” clause (Article 42, paragraph 7 of the Treaty on European Union), has been smashed to pieces. Up until now, the EU seems to have patterned its response on that of the 2008 financial crisis, which proves that it has learned nothing; it grants an endless amount of generosity to the economic fabric of our societies without demanding anything in return, and yet Northern European countries refuse to issue eurobonds or “coronabonds” because they fear “good debt” will be contaminated by “bad debt.”

In short, this brings back a dreadful feeling of déjà-vu, heightened by the irrevocable geopolitical situation. Southern European countries (Italy, Spain, Greece and France), suffering in their flesh and calling for a surge of European solidarity, are pitted against Northern European countries (Germany and the Netherlands at the head of the line), which have asked for two weeks to consider possibly triggering the European Stability Mechanism (which has €450 billion in funds), specifically designed for this kind of crisis! You can’t make this stuff up.

Is our world really changing? The facts, hard-headed, tend to prove the contrary. The world has just become tougher, more selfish, more cynical, more unequal and less united than in 2008. Fortunately, there are and always will be activists and idealists, whistleblowers and reporters without borders, concerned citizens and dedicated doctors to patch up today’s world and invent tomorrow’s.