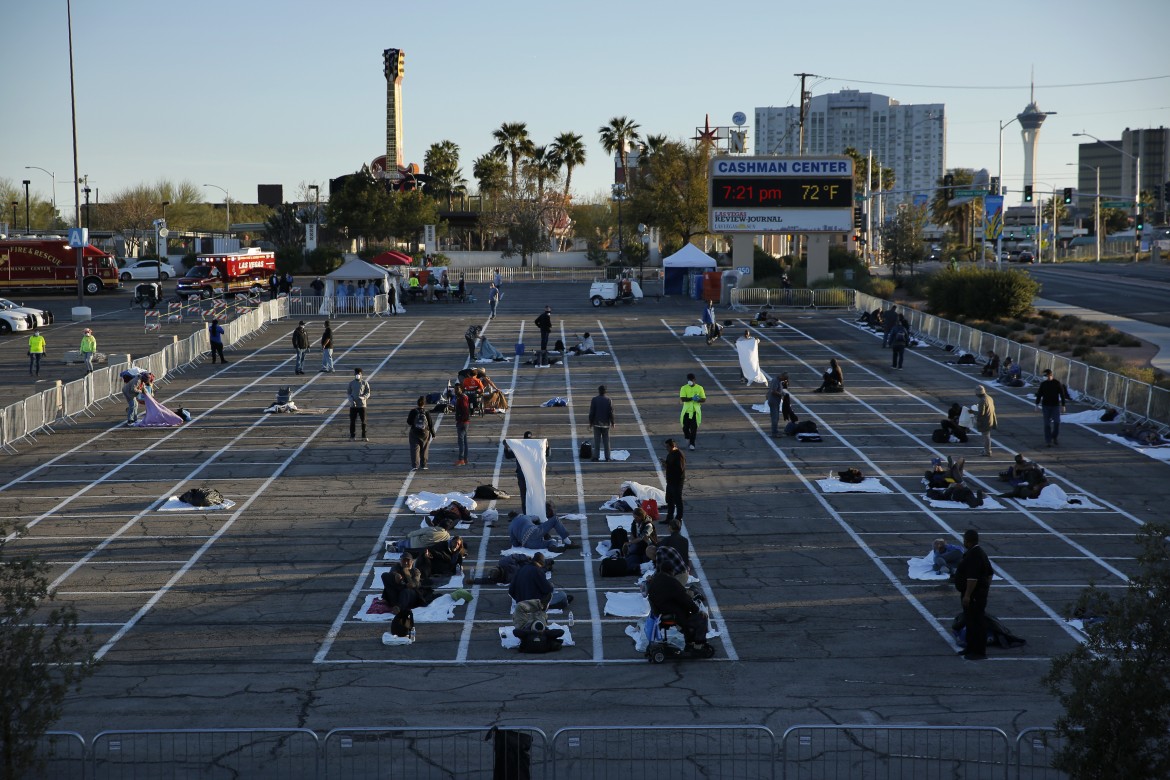 The epidemic is devastating a country in which 30 million citizens cannot access medical care.

The image is unsettling even amid the surreal panoramas produced by the pandemic, scenes of a deserted world and ghost cities. In the parking lot of a disused conference center in the Las Vegas suburbs, a rectangular grid has been drawn.

They look like white lines for parking spaces, but they have been drawn on the tarmac to park human beings.

Every painted rectangle delineates the space allotted to a homeless person. Many of the spaces on the chessboard beneath the leaden sky are indeed occupied by figures lying supine or curled up against the cold, surrounded by a scattering of meager possessions. These people are among about 500 who have been relocated from a Catholic Charities overnight shelter, vacated after one of the guests tested positive for the coronavirus.

The photo, which has been shared around the world, has become a symbol of the head-on collision between the pandemic and the richest, most unequal democracy in the developed world. A nation with incredible levels of poverty even at the peak of what had been, up until a month ago, one of the longest economic booms in its recent history, and in whose cities, in the shadow of the cranes and building sites, more than half a million people sleep in the cold (586,000, according to the latest census).

After decades of intentional erosion of social safety nets, often all it takes is a larger utility bill or, as a typical example, an unforeseen health care cost, to face eviction. Then, the chasm of the street opens up − the edge of a slippery slope leading to the margins of society.

The plight of the homeless remains one of the most shameful aspects of a society structured around the enrichment of an oligarchy that now also holds executive power. But it is not only the structural weakness of liberal America, highlighted by the virus, that has led to the photo from Las Vegas.

Aside from management issues related to federalism (at least while the White House is home to a national populist demagogue and his incompetent dynasty of unsightly minions), the global epidemic is sweeping across a country in which 30 million citizens do not have access to health care. In which there is no public health care coverage, nor is health care considered a right of citizenship. Instead, it is accepted that hospitals are health care businesses governed by budgetary demands, and under other circumstances, such an influx of paying patients would be a plus for their balance sheet.

However, as many health directors openly lament, epidemics, with their huge demands and the stress they place on equipment and personnel, do not conform to this business model. Not only that, but they damage the “core business” of health care: operations and billable visits. The other side of this disastrous system is private insurance – a hypertrophic $900 billion colossus of an industry with a turnover dependent on citizens’ illnesses, sustained by a massive lobby that ensures it political favor in Washington. The insurers have already announced that, beyond the possibility of delaying payment, there will be no discounts for health care – every patient will have to pay their premiums and deductibles.

The death of a 19-year-old from Lancaster, California, that seemed at first to have occurred after he was turned away from the hospital for not having health insurance, now appears to have happened in the ambulance en route. But every American knows that it’s a matter of time that similar cases will occur throughout a country in which the first bedside visitor in the emergency room after the fever subsides is often the financial specialist, who assesses the patient’s bank account.

Privatized health care was, therefore, already a horrific emergency before the pandemic hit. The average life expectancy for someone living on the street is 45 years. The health care crisis is bound to be intensified by a social catastrophe. We are only at the beginning of a phenomenon that will challenge the “social Darwinism” that views health in relation to a twisted meritocracy.

It’s not unusual to hear Fox News commentators or Republican politicians express the idea that excessive social and health care assistance will encourage those who are weak (of character) to take advantage. This reflects an ideological system imbued with supremacist and eugenic reasoning that is today openly expressed through the idea of herd immunity and a willingness to sacrifice the old and weak.

As predicted, the pandemic is about to collide with all the cynicism of a system veering toward unsustainable inequality, a system that has found in Trumpism the culmination of a war on the poor and whose disastrous effects are becoming apparent.

A system which, like private industry must optimize its profits and minimize expenditure, will predictably produce effects such as those revealed by the Los Angeles Times, which reported that the recorded infection rate is much higher in well-off areas than in black and Hispanic ghettos. That’s because in West Hollywood or Beverly Hills, wealthy patients can buy testing swabs that are unavailable in public clinics.

In many American cities, the homeless are the only people walking the deserted streets, but the pandemic has created numerous other orphans: street vendors, daily workers, the micro-economic workforce and the entire melting pot of marginal and marginalized citizen-consumers that form the necessary complement to the digital financial boom of liberal capital.

If, on one hand, COVID-19 is destined to reveal beyond any doubt the structural inequalities of a system predicated on growth and profit at the expense of the powerless, the Orwellian briefings of public self-celebration from the White House show that nothing will be spared to exploit this crisis and turn the disaster to the government’s advantage.

About Laura Hutchison 8 Articles
Laura Hutchison lives in Oxford, UK and works as a freelance copywriter for branding and marketing. She speaks Italian and French and is excited to be part of Watching America's translation team.