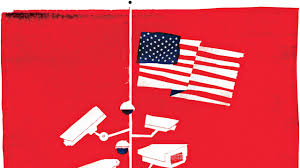 The USA Freedom Act. The Republicans have reauthorized the repressive post-9/11 Patriot Act by passing an amendment that extends the power of the FBI to conduct surveillance on all online browsing data, with no need for authorization. No warrant from a court or any third party is necessary. Investigators will be able to access all browsing history, chat history and call history.

Born in the wake of the twin towers attacks, the act is taking on a more ferocious nature during the pandemic. Created by exploiting one emergency, it continues to destroy liberties through the exploitation of another.

We know it now as the USA Freedom Act, a set of laws that, allowing for a name change from time to time, has permitted the U.S. to secretly spy on public activity since 2001. Anyone’s activity. That includes leaders of other countries, journalists and political figures. Activists. Now, though, everything is set to become more drastic, because “everything” will be legal, that is, permitted by law.

Here are the facts: The Freedom Act expired in March. The act had, in turn, extended the Patriot Act, passed the day after 9/11, by another five years. Attention was focused almost entirely on the so-called section or paragraph 215, which enabled investigators to access any information “relevant to a national security investigation.”

Edward Snowden, in making his allegations concerning the Patriot Act, outlined in detail what happened in the years that followed. The American government assumed the power to access data and information directly from “Big Tech,” to the extent that Rep. Jim Sensenbrenner, who drafted the original Patriot Act and has never been known for his liberal sympathies, declared that he was shocked by the way his law was used.

Be that as it may, let’s return to two months ago, when the Senate was required to vote on extending the legislation following approval by the House. The amendment arrives at the Capitol in Washington, just as the COVID-19 alarm is sounding (although the term “alarming” is perhaps excessive given President Donald Trump’s response to the pandemic).

A few weeks pass and then, at the start of this week, the issue is back on the House agenda. The event is preceded by a series of rumors. Among the most disturbing are those propounded by Fight for the Future, a group of artists, intellectuals and activists, who align the cause of digital liberty with that of social rights. The organization alleged that a large majority in the House was preparing to vote for a set of laws, which, under the guise of furthering the fight against pedophilia, would forbid the use of encryption.

This was the atmosphere that surrounded the session in the Senate. But no one – no one – expected that Senate Majority Leader Mitch McConnell would take advantage of the unsettled climate to present an amendment to the Freedom Act containing just a few sentences. It was stringently worded, but crystal clear in outcome: The FBI’s powers of surveillance were being extended to online browsing, with no need for authorization. No warrant from a court or any third party was necessary. Investigators would be able to access all internet history: sites, chats and events attended. All at their discretion. They have been doing this for a long time, as we discovered a few years ago in a great scandal. Now, the FBI will do so openly and face no consequences.

Some have tried to prevent this legal monstrosity from occurring, Democratic Sen. Ron Wyden of Oregon in particular. He produced a simple counteramendment, calling at the very least for a court warrant before the FBI can commence such totalitarian profiling. But to no avail. The counterproposal received only a single vote. And there was a further problem. At the time of the vote, Bernie Sanders was not in the room, or even in the Capitol — although his absence was justified, as he was engaged elsewhere. And then, of course, there was the significantly more relevant issue that nine Democratic senators aligned themselves with McConnell’s diktat.

Now the successfully amended law will return to the House for a rapid, almost perfunctory passage, before Trump signs the bill. Time is short. Among early responses to the amendment, there is a tweet from Tom Morello, guitarist for Rage Against the Machine, who said, “Seems like we should be storming government buildings over this rather than over access to Super Cuts.” Well, it’s worth a try.