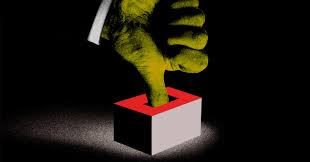 A month ago, Donald Trump said that elections would be going forward as planned — “Nov. 3, it’s a good number,” he said, also characterizing rumors of postponement as “propaganda.” The president is an expert at saying one thing, then the opposite. He has a talent for navigating the chaos that he himself has created. His goal is to control the narrative and its rhythm with the help of his friends at Fox News and other ultraconservative media outlets.

This week, royal son-in-law Jared Kushner, who plays multiple advising roles, said that he did not know if the national election would be postponed in the case of another wave of the coronavirus in the fall. He remarked, “It’s too far in the future to tell. It’s not my decision to make so I’m not sure I can commit one way or the other.” Interesting nuance. The president’s advisers — the same people who are twisting the law to try to release Michael Flynn from prison (Flynn was Trump’s first National Security Advisor, implicated in “Russiagate”) — are analyzing all possible scenarios. The virus doesn’t worry them; losing does.

With confinement measures in place, the U.S. will reach 140,000 deaths within six weeks, according to experts who are also tracking the evolution of COVID-19 in China and Italy. But it will get worse because the White House and Republican states are pushing to loosen quarantine measures in order to stimulate the economy and save jobs.

Polls favor the semihidden figure of Joe Biden, who is unable to compete for media presence against his omnipresent rival. Trump is nervous, and so is increasingly making mistakes — the most recent being his racist insult directed at a reporter in a press conference. His new smokescreen: “Obamagate.”

Murmurs of postponing elections are already here. Some states have postponed primaries, in which governors also run for election. The date for the presidential election is fixed by an 1845 federal law as “the Tuesday next after the first Monday in the month of November.”

Only Congress can change it, and it is quite unlikely that the Democrats, who have the majority in the House of Representatives, will fall into such an obvious trap. Not even a declaration of martial law would give the president the power to cancel elections, let alone extend his term, which, according to the Constitution, ends on Jan. 20 at 12:00 noon.

But we are facing an unpredictable man who has not yet hesitated to use public resources to defend his personal interests. For the past few weeks, he has been playing an underground game to delegitimize the results, should they be unfavorable. He has already publicly attacked voting by mail.

California has announced that it will send ballots to all registered voters in the state in the case that voting sites will not be able to open. Other states will follow. What about the 26 states with Republican governors? As a last ditch effort, they will claim that the elections were illicit and they’ll refuse to accept the result. Let’s see what happens.

About Madeleine Brink 36 Articles
I am a linguist and teacher with a background in American Studies and Spanish. Having lived in various parts of the United States, the Dominican Republic, and Spain, and having taught both Spanish and English languages at the university level as well as in business settings and academies, I firmly believe in the power of cultural exchange and appreciation as one way into widening and deepening ourselves, our conversations, and our relationships.