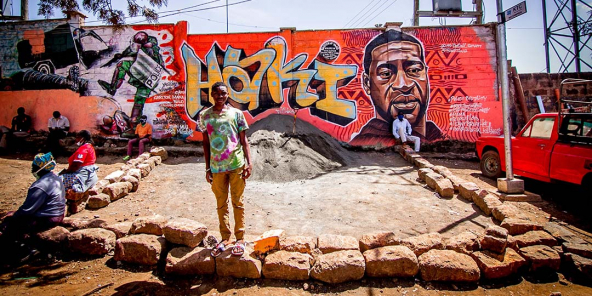 Against the backdrop of African American anger in response to George Floyd’s murder by a white police officer, the movement demanding the truth about Adama Traoré’s death in France is again gaining momentum. But could a transnational Black community really emerge?

From Paris to Dakar, Black populations have stood up to the murder of African American George Floyd perpetrated by a white police officer. Global outrage over this, just one of countless racial crimes committed by American police, has inspired some activists to call for a coordinated political response from the Black community around the world.

By contrast, some question the appropriation of a problem that they would like to imagine as exclusively American. In July 2016, 24-year-old Adama Traore died in French police custody. The four-year forensic marathon searching for the exact cause of death is a testament to the strong reactions and incomprehension by French political leaders surprised at the scale of demonstrations in Traore’s memory.

In fact, the Floyd incident echoes the Traoré affair. But, in a world dominated by the concept of the nation-state, can there be a politically active Black transnational community?

A community is a social group made up of people sharing the same characteristics, the same way of life, the same culture, the same language and the same interests. According to these criteria, the Black community that some dream of bringing together does not exist, it is only a fantasy. While Black populations undeniably share the same skin color, that is the characteristic they have in common. They do no share any language, culture or interests.

While African American and African European struggles are directed mainly against state racism which ostracizes them, the struggles of Black Africans aim instead to meet their basic needs (security, health, etc.). In this way, the divergence of interests and objectives among different Black populations remains a major obstacle to comprehensive political action.

The absence of a Black community has not, however, prevented the development of a Black identity which, as historian Pap Ndiaye reminds us, is based on common social experience. The experience shared by Black populations is, first and foremost, the fruit of a common history. In addition, whether African American, Caribbean or African, these people find their origins on the same continent and share a past marked by slavery and/or colonial systems. Similarly, in music, although the tones differ, synchronicities flow between the ambiance creators of Lagos and the rappers of the Bronx.

It is this common foundation that allows a feeling of identity to develop, which makes Black populations support and act in this initially African American fight. It is in this sense that African Union Commission President Moussa Faki Mahamat’s official condemnation of the murder gives a political voice to a group that until now did not have one.

While it may be unlikely that an African initiative can prevail in the American racial debate, such outrage at the highest level of politics on the continent gives cadence to the notion of Black identity and intensifies media pressure on American policymakers. In the absence of a sustainably and politically structured community, a sense of identity can be a vector of solidarity between the singular struggles waged by Black populations around the world. This is what is now happening.