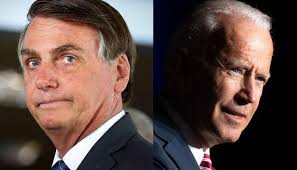 The Democratic candidate’s victory would increase international pressure on Bolsonaro.

When he was vice president, Joe Biden had, as one of his duties, taking care of U.S. relations with Latin America. He was important in easing tensions with Cuba, he did not escalate the imposition of sanctions on Venezuela, and defended the hardening of immigration policy. But it was with Brazil that Biden had the greatest success and failure at the same time.

President Luiz Inacio Lula da Silva’s diplomacy ended bitterly with the failure of the treaty to control Iran’s nuclear weapons. Brazil’s attempt to mediate a treaty which secured limited access to Iran’s uranium was sabotaged by the Americans. Lula never forgave Barack Obama, and when there was a change of power in Brazil, the American did everything possible to get close to Dilma Rousseff.

Biden was the special envoy sent to normalize relations between the U.S. and Brazil. He came to Brazil several times and telephoned Rousseff almost every month. So much of the interest was also economic. At the time, Brazil had negotiated the renovation of its aeronautic fighter fleet with business candidates from France, Switzerland and the United States. Minister of Defense Nelson Jobim favored the French, while the brigadiers were predisposed to the Swiss.

Like a traveling salesman, Biden met with ministers, brigadiers and politicians. When someone complained about the U.S. Defense Department’s rigidity regarding the transfer of technology, Biden took note of that and returned with an answer. When someone complained about the price, he returned with a discount and financing through subsidized interest payments. Within a few months of Biden’s work, the American aviation company Boeing was already favored to win the bid for the fighter fleet. Biden is a salesman who could sell refrigerators to Alaska. (For details of the negotiations, read the Quarterly and Estadao.)

Everything changed in 2013, when WikiLeaks disclosed that an American intelligence agency had tapped Rousseff’s phone and those of dozens of Petobras advisers and directors. Political conditions after the scandal did not allow for American businesses to win any bids for delivery of military products, and Biden’s commercial project failed. Biden delivered the official apology that Obama did not make. Even without the victory for Boeing, Biden managed to keep relations between the two governments from deteriorating. It was done during a time when anti-Americanism was on the rise in Venezuela and Argentina.

Because of this experience with Boeing and WikiLeaks, if elected, Biden would know Brazil better than any other American president. He knows how its politicians think, he knows how the bureaucracy functions, and he has respect for the military. If Biden were president, Jair Bolsonaro would have an interlocutor who doesn’t mince words.

In an email interview with Americas Quarterly in March, Biden was challenged to speak about Brazil’s environmental politics. “The fires that ravaged the Amazon last summer were devastating and provoked global action to stop the destruction and support reforestation before it’s too late. President Bolsonaro should know that if Brazil fails to be a responsible custodian of the Amazon rainforest, then my administration will rally the world to ensure the environment is protected.” Biden said.

In recent weeks, diplomats linked to the State Department have tried to minimize Biden’s remarks, advising Brazil that the pragmatic Biden would not put the environmental agenda above commercial relations. Nonsense! Brazil under Bolsonaro is the world’s environmental villain, and Biden as the new president would never ignore the power of green discourse among American youth.

Pressuring Brazil to have a responsible environmental policy is one of the least costly actions that Biden could take in his first year in office, along with returning the U.S.to the Paris climate agreement. If Brazil maintains its destructive environmental policy, the idea of imposing sanctions on Brazil would gain popularity among both the youth in the green movement and Midwest farmers. To suppose that a man as experienced as Biden would miss this opportunity is to be ignorant about the ABCs of politics. Biden’s election will be exceedingly bad for Bolsonaro.