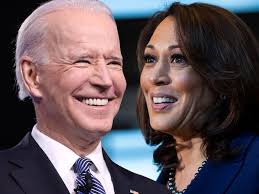 Joe Biden has chosen a running mate with a solid financial network, a strong personality and an inspiring story, even if her ideological positioning remains hazy and her career so far is not to everyone’s liking.

Has there already been a “Kamala Harris effect”? Twenty four hours after revealing the name of his running mate in the White House race, Joe Biden had raised an extra $26 million. The 60 minutes which followed the announcement on Tuesday [Aug. 11] were the most fruitful in terms of fundraising for the Democratic campaign. An excellent start for this ticket of complementary profiles. “You really feel it, the enthusiasm,”* said the candidate, making up for his financial delay relative to that of Donald Trump.

Kamala Harris, senator of California since 2017, brings with her a network of wealthy donors from Silicon Valley who, until now, had been moderate in their support. On Wall Street, too, the name of the successful politician is well received. Nothing surprising for this 50-something in her recent political career, which is based on years of successful campaigns for the role of district attorney of San Francisco and attorney general of California. The American press, which combed through previous accounts, revealed that even Donald Trump and his daughter Ivanka provided funding to Kamala Harris in 2011 and 2014.

The Republican head of state was incidentally surprised by her selection as running mate. According to his team quoted in Vanity Fair, he saw the reserved Rep. Karen Bass in that role instead, and was surprised that former Vice President Joe Biden would choose somebody more charismatic than he is to occupy his old post. “Kamala is going to be THE candidate … She’ll be constantly overshadowing him. In three to four weeks, Biden is going to realize he made a dumb move,” one of Donald Trump’s advisors confided.

Kamala Harris, often compared to Barack Obama for the color of her skin, her eloquence and her fast rise to power, isn’t usually accustomed to staying in the background. But at 77 years old, Joe Biden isn’t hiding her: He sees Kamala as a figure of transition, a “bridge between generations.”* If elected in November, he will serve only one term. He therefore fast-tracks his 55-year-old heir apparent toward potential candidacy in 2024. In this context, the choice of a strong personality could make sense. Biden has already said that his partner would take part in all debates at the White House, and would be the “last voice in the room” at decision-time. He had made this same agreement with Barack Obama in his era.

Joe Biden assured on Wednesday [Aug. 12] that unlike his rival, he wasn’t fearful about having a “strong woman” by his side.* Her numerous television appearances have gone down in history in recent years: First in 2017, when Kamala Harris grilled Supreme Court nominee Brett Kavanaugh, accused of sexual assaults. Faced with her insistent questions and determined expression, Judge Kavanaugh lacked confidence. Joe Biden, too, when she criticized him on questions of race during the first debate of the Democratic primaries. Donald Trump relies on an authoritarian image to affirm that Kamala Harris is a “nasty” and “mean” woman.

This last insult, however, invites a demonstration of the other sides of her personality. Her campaign has not hesitated to show her joyfully cooking, dancing when she goes to meet voters or laughing with friends. We saw her smiling and emotional on Wednesday [Aug. 12] in her first shared meeting with Joe Biden. “My family means everything to me. I’ve had a lot of titles over my career and certainly Vice-President will be great, but Momala will always be the one that means the most,” she said. That’s what the two children of her husband, the wealthy lawyer, Douglas Emhoff, call her. The couple met on a date arranged by mutual friends and married in 2014.

Hard-headed politician or warm stepmother? Kamala Harris wants to make the two images coexist. You find the same duality in her ideological positioning. The left of the Democratic party criticize her for being too far right. Donald Trump, on the other hand, calls her a “radical” leftist. It is clear that she has made her campaign less on her ideas and more on her personality. During her candidacy in the primaries, she adopted several progressive proposals from the Sanders/Warren camp, such as universal health insurance for all, minimum wage of $15 an hour and reforms of the criminal justice system.

Opportunism, cried her critics. Indeed, even today she still can’t shake off her reputation for firmness during her career as an attorney. It’s not for lack of trying to get rid of it. “I know some others questioned how I, as a Black woman, could countenance being part of ‘the machine’ putting more young men of color behind bars,” she wrote in her memoir published in 2019. “There is no doubt that the criminal justice system has deep flaws, that it is broken in fundamental ways. And we need to deal with that. But we cannot overlook or ignore that mother’s pain, that child’s death, that murderer who still walks the streets. I believe there must be serious consequences for people who commit serious crimes.”

To counteract her strict image, Kamala Harris highlights her battles against sex trafficking and against the big banks after the subprime crisis. She enforces the “Back on Track” program, which she implemented in California. It aims to help petty criminals to get back on their feet rather than being left to their fate, which often contributes to recidivism.

“She pushed for programs that helped people find jobs instead of putting them in prison, but also fought to keep people in prison even after they were proved innocent,” nuances the left-wing site Vox. “She refused to pursue the death penalty against a man who killed a police officer, but also defended California’s death penalty system in court. She implemented training programs to address police officers’ racial biases, but also resisted calls to get her office to investigate certain police shootings.”

If some on the left haven’t forgiven Kamala Harris for her past, Joe Biden is also counting on his centrist profile to even put at ease Republicans disappointed by Donald Trump, notably women who hold degrees in the well-off suburbs, the electoral category who can often make or break an election.

He also hopes that the nomination of Kamala Harris, of paternal Jamaican and maternal Indian descent, and who, as a baby, went everywhere in her stroller on protests for civil rights, will allow him to arouse enthusiasm from the Black community, a pillar of the Democratic Party that neglected to vote in 2016 for the Hillary Clinton-Tim Kaine ticket. On Wednesday [Aug. 12], Joe Biden spoke of “little girls,” particularly “little girls of color who so often feel forgotten and underestimated.” But “today, perhaps, they see themselves differently for the first time: with the makings of a president or a vice-president.”

In her memoir, Kamala Harris maintains that if, as a child, she had plenty of confidence in herself, it was thanks to her mother, who died in 2009. Shyamala Gopalan Harris left her native India to become an oncologist in the United States. After her divorce, she took care of Kamala and her younger sister Maya. “My mother understood very well she was raising two Black daughters. She knew that her adopted homeland would see Maya and me as Black girls, and she was determined to make sure we would grow into confident Black women.” The result? “I think I can do anything.” Her journey until now doesn’t contradict her.

*Editor’s Note: Although the translation is accurate, this quotation could not be sourced.