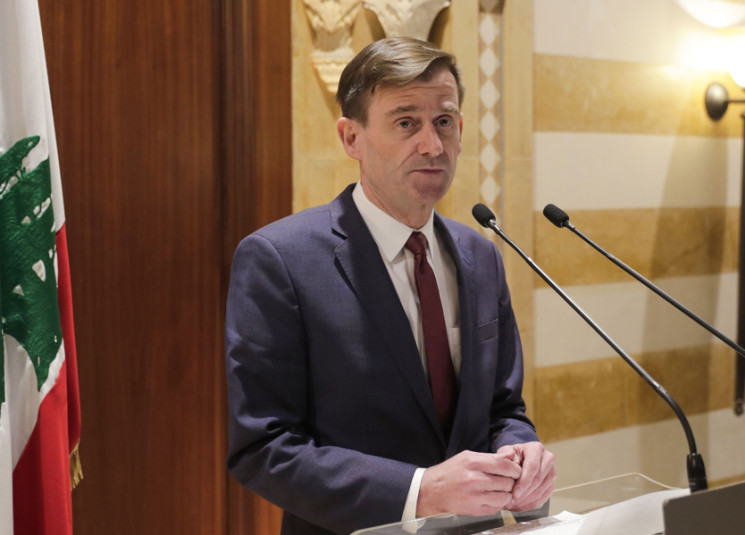 Now that the catastrophe has come and gone, leaving behind disastrous repercussions, volunteers surveying the damage and restlessly searching for the dead, wounded and missing can only wait for two things. First, to find out what the satellite images that Lebanon requested from the Americans and the French will reveal about the blast, and second, the American delegate’s arrival in Beirut tonight, with the French initiative and a proposed new government on the horizon. So, where do these two roads lead us?

It seems clear that the continent-crossing, language-barrier breaking diplomatic movement that has come to Lebanon would not have been possible if disaster had not struck. After an era of international isolation, the country was ushered into a hostile position against its friends and allies. Now, in a twist of fate, catastrophe has taken on a humane characteristic by partially loosening the grip of isolation. It has also led to an attempt to convince the Lebanese of the reforms needed to end their political and economic isolation, to restore Lebanon to its natural place among the group of friendly countries.

There is no better evidence for this than the world misinterpreting the “resignation” or “removal” (same difference) of a government that is “facing challenges.” In either case, the actual situation has been lost in translation, perceived to be a rising of tensions between the legislative and executive powers – and the latter will ultimately pay the price. For whatever reason, the government failed to fulfill its duties – the most prominent among them completely shrugged off the accusations that they faced. Some of the ministers who were found to be hand in glove with the politicians and closely associated in internal affairs failed to take the obvious next steps to clear their name, so they paid a high price for their inability to face those difficulties.

Aside from this situation and its renditions around the world, there is now a grab (or wish) to advance the role of France, as shown by the two-part initiative launched by President Emmanuel Macron on the day after the explosion. While it is a humanitarian and immediate relief-centered role, it is also an attempt to end the political and monetary crisis that preceded the disaster. Short of its many obstacles, the French initiative did its job in an adequate and temporary manner after Macron’s “raid” of Beirut, the first step in the plan. It led to a virtual conference with world donors who pledged immediate aid to the tune of 253 million euros, aside from previous land and air deliveries of medical, hospital and food donations from Western and Arab countries.

Consequentially, observers recognize that the political, economic, and monetary aspects of the initiative are the most important. Immediately following the launch of the French initiative’s first humanitarian phase, the second will need additional effort, especially since it discusses political, constitutional, monetary and administrative reform mechanisms that Lebanon must adopt to overcome the governmental crisis. In facing the road ahead of the parliamentary resignations, disagreements have resurfaced again among the Lebanese people (including those in power and the sponsors of the dethroned government). It’s almost as if the situation is the same as it was before the Aug. 4 catastrophe.

Everyone realizes that the divide lives on among the people in power. Additionally, current negotiations with the International Monetary Fund and others resulting from the crisis prevent the country from paying back its own international financial dues. Starting with the eurobonds, things have not changed, and the French initiative cannot resolve the situation. There is a need for international and regional support that has not yet matured. Everyone knows that, and they know the magnitude of support that is required. But perhaps the most pressing need is for American approval, which affects Tehran (albeit in different proportions). This is the more direct aim of the French, opening lines of communication between Paris, Washington, New York, Tehran and Moscow.

From this angle, the radar shifts toward U.S. Under Secretary of State for Political Affairs David Hale, who is scheduled to arrive in Beirut this evening for an official two-day visit. The trip was scheduled following the blast, but before the en masse resignation. The blast and resignation will inevitably be on the table for discussion, which will take place with Lebanese officials, bipartisan leadership, and other important figures, with the exception of Hezbollah officials.

If the American stance on the economic crisis is still unchanged, the U.S will not welcome another “one-color” government. This is not because it was headed by former university Professor Hassan Diab, but because it brought together Hezbollah officials, who prefer that an autonomous and nonaligned government emerge. That is what the Americans cannot get on board with, for any party involved, especially not the sponsors of the previous government. So, Hezbollah officials are entrapped by their symbiotic, almost survivalist relationship with high officials, and by the protocol and minimum effort required to maintain diplomatic relationships between the countries. That explains why the American ambassador to Lebanon, Dorothy Shea, did not offer the harsh criticism that she has given on numerous occasions in the past.

To add to that, some believe that the French initiative cannot possibly produce its desired result with a step-by-step approach. Many believe that the initiative’s sponsors seriously recognize the number of existing complexities between Washington and Tehran and those within the strained relations between the Gulf countries and Iran. The notable 2017 to rescue and break President Saad Hariri out from Riyadh is a still relevant example. Paris will not have fulfilled its mission if Lebanese officials do not pledge to leave their special interests aside, their promises will evaporate into thin air. The relationship between Lebanon and its allies has deteriorated, and the Lebanese have put up a total economic and diplomatic blockade, some of which remains in place despite the humanitarian openings that resulted from the explosion and the scale of the disaster.

Lastly, in addition to putting their money on the French political initiative, there is another equally important task for the Americans. Just as the president asked his French counterparts to capture satellite images showing what took place in the port on the evening of Aug. 4, he also requested information from the Americans, even if it was not announced. A member of the security leadership inquiry committee just about confirmed American involvement, linking a confirmation of foreign interference or an Israeli role in the explosion with the possible quantity of “opposition missiles” or “war equipment” in the port. This all but guarantees that Washington will be present on the security and political fronts. If America merges with the other international actors, it could quickly push the French initiative forward, otherwise, nothing will change. The positions that emerged after the resignation regarding Hariri’s Lebanon or a (seriously) free Lebanon independent from politicians and Hezbollah actors (perhaps a certain president and some members) will remain mere ideas. Some of those members who made up Diab’s government must not be aware of what happened on Aug. 4, or just simply don’t care.